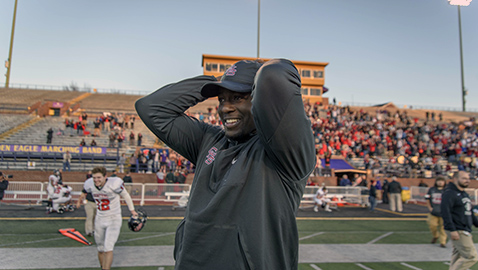 During a lightning delay that lasted close to three hours before the 2018 TSSAA Class 5A state championship game was postponed, Bryson Rosser made that time count and those minutes memorable.

“One of my fondest memories with this senior class will be sitting in the locker room at Tennessee Tech on Saturday night and waiting for the game to be decided after the extended weather delay,” recalled the Central High head football coach Friday.

“We sat around in a circle in the corner of the locker room and talked about memorable stories, workouts, punishments, jokes and quotes over the last four years. It was great to hear about all their journeys and to have it come full circle to that moment.”

The Bobcats returned to Knoxville very late that night and then returned to Cookeville early the next morning and defeated a strong Henry County team 14-9 to capture the school’s first state title since the TSSAA playoff system was adopted in 1969.

Winning the state crown made it easy for fellow Knox County coaches to pick Rosser The Knoxville Focus / Coaches’ 2018 Knox County Coach of the Year.

“I am humbled and honored to have been selected for this award,” said Rosser after receiving the news. “There’s nothing more special than earning the respect of your peers and I think winning this award is a reflection of that.

“I have the wonderful privilege and honor of working with amazing student-athletes and have the support of an unmatched coaching staff. Winning this award is also a testament to their hard work.”

The Bobcats won 13 straight games after losing their first two.

“After starting the season 0-2, we were a bit skeptical yet confident in our ability to win games,” Rosser recalled. “We had quite a few miscues in the first two ball games and felt that if we could minimize our own mistakes and capitalize on opportunities during the game we could come out on top of some upcoming matches.

“While Cookeville is always the ultimate goal – that’s also where we take our team and staff for summer FCA Camp – our focus during the season has always been one game at a time and we were blessed to play and win the last game of our season.”

Rosser too shares the gold football with former players and all those who have been part of the CHS program in Fountain City through the years.

“Our team stood up to the challenges on that Sunday afternoon and with the unbelievable planning and belief of defensive coordinator Nick Craney, we all came to the belief that ‘defense truly wins championships.’

“I’m so proud of this team for what they have accomplished. As always, I am honored, thankful and blessed to be the Head Football Coach of Knoxville Central High School.”