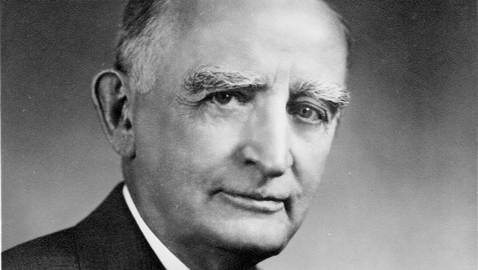 Wyoming today is dominated by Republicans, but during the height of Franklin D. Roosevelt’s New Deal, perhaps the most popular politician in the state was a Democrat: Joseph Christopher O’Mahoney. Like the state he represented in the United States Senate, O’Mahoney prided himself on his independence. The Wyoming senator was perhaps the fiercest opponent of monopolies in Congress. Senator O’Mahoney described his role in Congress as “developing the resources of Wyoming and the West.”

O’Mahoney was born November 5, 1884 in Massachusetts, one of eleven children. The son of Irish immigrants who arrived in America just as the Civil War broke out, O’Mahoney’s father was a furrier by trade. Years later, O’Mahoney was referred to more than once as “a man who speaks for the wide open spaces of Wyoming with a Boston accent.”

Joe O’Mahoney managed to get an education, eventually attending Columbia University. Young Joe O’Mahoney was drawn to journalism, landing a job with the Cambridge Democrat when he was twenty-three. O’Mahoney went west to Boulder, Colorado to work for the Herald newspaper. It was while living in Colorado that he met and married Agnes O’Leary in 1913.

In 1916, Joe O’Mahoney moved to Cheyenne, Wyoming, where he had been offered a job as editor of the State Leader. It was a decision that would help determine the rest of O’Mahoney’s future. The owner of the paper was John B. Kendrick, a wealthy rancher and cattle king. Kendrick was also the governor of Wyoming. Kendrick had been elected to the United States Senate in 1916 and would remain in office until his death in 1933.

O’Mahoney’s association with John B. Kendrick would last for the remainder of the latter’s life. When Governor Kendrick left for Washington, D. C. he took his editor with him to serve as his Secretary (the equivalent of Chief of Staff today). It was while working in Washington that Joseph O’Mahoney decided to attend Georgetown University’s Law School and he earned his LLB degree in 1920. O’Mahoney left Senator Kendrick’s staff to return home to Cheyenne to practice law. The young lawyer, while representing the interests of several clients, became curious about impending leases at the Teapot Naval Oil Reserve. O’Mahoney prodded Senator Kendrick to investigate what eventually became the biggest scandal of the 1920s, the Teapot Dome oil leases, which eventually brought down Secretary of the Interior, Albert B. Fall.

Joseph O’Mahoney kept up his interest in politics, most specifically Democratic Party politics. O’Mahoney served in various posts in the Wyoming Democratic party and became a big supporter of New York Governor Franklin D. Roosevelt in 1932. O’Mahoney became vice chairman of the 1932 Roosevelt campaign, a post which led to his being named as an assist Postmaster of the United States. O’Mahoney’s ability and Senator John Kendrick’s influence helped the Wyomingite to become part of the New Deal.

The death of O’Mahoney’s political patron paved the way for his future. On November 3, 1933 the seventy-six year old Senator Kendrick died from a cerebral hemorrhage. Kendrick’s death left a vacancy and Joseph C. O’Mahoney was appointed to the United States Senate on December 18, 1933 by Governor Leslie Miller. O’Mahoney had to run for a full six-year term in 1934 and faced a capable and serious Republican opponent. Vincent Carter served as Wyoming’s lone congressman and had demonstrated considerable political skills in winning statewide office in 1930 and 1932, both big Democratic years. O’Mahoney had loyally supported the New Deal program and had quickly consolidated his base and won a resounding victory with 57% of the vote.

Senator O’Mahoney remained devoted to representing the interests of Wyoming, but ran afoul of President Roosevelt when he refused to support FDR’s plan to pack the Supreme Court in 1937. O’Mahoney’s refusal to back Roosevelt’s plan led to frosty relations between the Wyoming senator and the White House. When FDR visited Wyoming, Senator O’Mahoney was reduced to standing in the crowd waiting to greet Roosevelt, rather than riding on the president’s train.

While Senator O’Mahoney was generally a supportive of both Roosevelt’s New Deal and Harry Truman’s Fair Deal, he was known to wander, as he did with the court packing plan. Generally, Joseph O’Mahoney would never agree to any policy which he believed would injure the interests of Wyoming. O’Mahoney gave the White House trouble over reciprocal trade agreements that affected Wyoming livestock and products.

O’Mahoney’s political troubles did not begin and end with the White House; he faced voters in 1946, a year that saw both houses of Congress change hands, with the Republicans winning sweeping victories. Senator O’Mahoney had faced Milward Simpson, a future governor and senator from Wyoming (and the father of Senator Al Simpson) in 1940 and won.  There had been speculation that President Truman might appoint O’Mahoney to serve as Secretary of the Interior following the resignation of Harold Ickes.

Ickes had been Secretary of the Interior from the dawn of the Roosevelt administration in 1933 until his resignation in February of 1946. Only Harold Ickes and Secretary of Labor Frances Perkins (the first woman to serve in a presidential Cabinet) served throughout the entirety of Franklin D. Roosevelt’s time in office. The sum of Harold Ickes’ personality could be ascertained by the title of his own memoirs: “The Autobiography of a Curmudgeon.” Ickes relished feuds and fights and engaged in them frequently. He trumpeted his own political independence, as well as his integrity. Ickes had been a Republican and a progressive and had been named to FDR’s Cabinet after every other person offered the Interior portfolio had turned it down.

For one who loved to fuss and fight, Harold Ickes possessed rather tender feelings and a petulant nature. He recorded in his voluminous diaries every real and imagined slight, as well as his frequently tart observations of others. Ickes had the habit of offering his resignation whenever he felt slighted and was accustomed to an amused Franklin Roosevelt refusing to accept it. Harry S. Truman was a different matter. Ickes cried he was being pressured to lie under oath before a congressional committee considering the nomination of Democratic fund raiser extraordinaire and oil millionaire Edwin Pauley to be under Secretary of the Navy. Ickes’ charges scuttled Pauley’s nomination, leaving President Truman furious. When a chagrined Ickes offered his resignation, Truman accepted it with alacrity, leaving the Secretary of the Interior somewhat surprised.

O’Mahoney and Truman had served in the Senate together and it was unclear whether the man from Wyoming wanted to be Secretary of the Interior. He did very much want the Democratic vice presidential nomination in 1948 to run with Harry Truman, but would have had to give up his Senate seat to campaign. Truman announced he believed O’Mahoney’s talents were best suited to remaining in the Senate.

Senator O’Mahoney was fortunate in 1946 inasmuch as his Republican opponent, Harry B. Henderson, was not a top tier challenger. Henderson campaigned on classic Republican themes, denouncing excessive taxes and government bureaucracy. Harry Henderson went ever farther, demanding the United States stop exporting cars, trucks, lumber and a host of other “critical materials” overseas.

Henderson, like O’Mahoney, was a Cheyenne lawyer, and had served in the both houses of the Wyoming state legislature. Harry Henderson had fought in World War I and had been chairman of the Wyoming Republican Party. Henderson had run for Congress in 1930 and lost the Republican primary. In 1940, he had sought the GOP nomination for the United States Senate and had been beaten again.

At least one nationally syndicated “news analyst and commentator” thought “John Henderson” had a good chance of upsetting Senator O’Mahoney. For his part, O’Mahoney pounded home the benefits his service in the Senate had brought to Wyoming. It was an effective message and as Democrats all across the country were going down to defeat, Joe O’Mahoney won reelection with better than 56% of the vote.

O’Mahoney’s influence in Congress was lessened with the Republican majority in the Senate, but he remained effective in his distrust of big business and fight against monopolies. He was disappointed when Harry Truman chose Senator Alben Barkley of Kentucky as his running mate in 1948, but O’Mahoney campaigned for the national ticket.

Times were changing when O’Mahoney was seeking another term in the Senate in 1952. For one thing, Senator O’Mahoney faced a much more serious and seasoned opponent in Governor Frank Barrett. Barrett owned and operated one of the largest sheep and cattle ranches in eastern Wyoming. Although he had lost a race for Congress in the heavily Democratic year of 1936, he had rebounded to win Wyoming’s congressional seat in 1942. Barrett had been reelected three times before being elected governor in 1950. Republicans urged the governor to challenge O’Mahoney, feeling he was the strongest candidate they could field. The GOP was bolstered by the presidential candidacy of Dwight Eisenhower, arguably the most popular man in the country. Despite his intellectual oratory and wit, Adlai Stevenson proved to have little popular appeal to the people of Wyoming.

Barrett eked out a narrow victory, defeating Senator O’Mahoney by just over 4,200 votes. Sixty-eight years old at the time of his defeat, it looked to be the end of his long political career. Devastated by his loss, Joseph C. O’Mahoney and his wife settled into dividing their time between Washington, D. C. and Cheyenne, Wyoming. O’Mahoney opened a law practice and prospered. A singular and disturbing event would resuscitate O’Mahoney’s political fortunes

Lester Hunt was Wyoming’s senior United States senator. Evidently his youngest son was caught in a minor scandal and several Republican senators pressured Hunt to announce he would not be a candidate for reelection in 1954 or they would make the scandal public. Senator Hunt entered his suite in the Senate Office Building and was carrying a rifle under his overcoat. Hunt shot himself and later died in the hospital. Hunt’s death left a vacancy and as the Republican appointee to fill Hunt’s seat was not a candidate for election, created a race for an open seat.

Both parties backed the two strongest candidates they could offer; the Democrats turned to seventy-year old former senator Joe O’Mahoney while the Republicans nominated William Henry Harrison. Harrison was the grandson and namesake of the ninth President of the United States. William Henry Harrison had been elected to Congress in 1950 and reelected in 1952. The two men waged a hard fought campaign, which many believed would help to determine which party would hold a majority in the Senate, which proved to be correct.

O’Mahoney won by less than 3,500 votes, almost precisely reversing the results from 1952. Despite his age and the loss of his seniority in the Senate, O’Mahoney proved to be highly effective. In 1959, O’Mahoney was felled by a stroke, which left his left arm at least partially paralyzed. Senator O’Mahoney was in the hospital for much of the last session of Congress, prompting an encouraging note from Senate Majority Leader Lyndon Johnson on September 10, 1959. Johnson assured O’Mahoney he was missed and offered the use of his limousine and driver, should the Wyoming senator need them.

The veteran senator’s health continued to decline and he sent a letter to Teno Roncalio, then chairman of the Wyoming Democratic Party, announcing he would not be a candidate for reelection in 1960. O’Mahoney’s announcement, made in May that year was the end of his political career.

Although he once again put out his shingle as an attorney, O’Mahoney’s health was not good enough to do much. The former senator enter Bethesda Naval Hospital in the late fall of 1962 where he spent nineteen days, supposedly being treated for a heart ailment. Senator Joseph C. O’Mahoney died on December 1, 1962 at the age of seventy-eight.

O’Mahoney did much for the western states and his own state of Wyoming. Without his efforts, many enormous businesses would have continued for years to have monopolies in their respective markets. A forceful speaker, highly intelligent, and an able man, Joseph C. O’Mahoney made a difference.