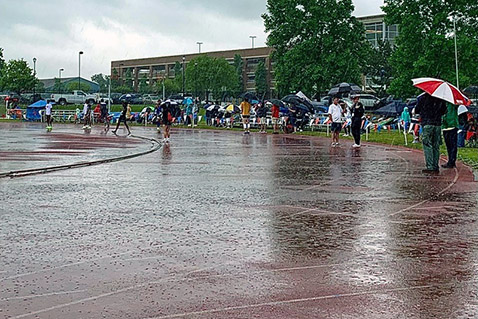 On the Saturday morning of Farragut’s championship game against Clarksville May 28, senior Lauren Brakovec revealed how the Lady Admirals had dealt with a few days of stormy weather at Spring Fling XXIX.

“For me, it’s all about staying loose and keeping the energy at a high level,” she said. “We had most of our team in an empty dugout to try and stay dry during the heavy rain, but we also had some loud music to keep us pumped up.

“We had a few juggling competitions and dance battles, but later I found myself playing wide receiver and catching footballs from one of my friends in the stands. We just try to keep a positive attitude to get us in the right mindset before we have to go out and play.”

There were no weather issues later that day and the sun was out for most of Farragut’s Class 4A title game. In fact, minutes before game time, Brakovec was applying eye black to many of her teammates’ faces to keep the glare out of their eyes.

With a good crowd of Farragut fans on hand at McKnight Park in Murfreesboro, the Lady Admirals took care of business on Starplex Field No. 4 and capped their season with a 4-0 win for a second straight state championship.

Individually, Brakovec ended up with the most home runs in a season (12), which was one more than she belted a year ago. Rising senior shortstop Ava Guzowski is tied for third on the list with 10.

BRIGHT FUTURE: Gibbs’ softball team placed second this year for the fourth time in school history. Its other runner-up finishes were in 2014, 2008 and 2003.

With six sophomores and freshmen this season, the future looks promising.

“Let me start off by saying I love this team,” said Coach Carol Mitchell, who saw her players battle through the losers’ bracket to make it to the Class 3A finals against Lexington before falling 2-1.

“They’re fighters, they’re winners. They battled in tough games all season and just when people had pretty much marked them off, they come through and they took that first game today into extra innings (before winning over Hardin County 7-6).

“We’ve done that all year in some of the close games we’ve had. They don’t get rattled. (Pitcher) Lacey (Keck) was phenomenal today. She’s a freshman. We had no idea she could go the distance today. We had Abby (Buckner) ready to go but she kept throwing good pitches in there and our defense held strong.

“It is hard to come out of the losers’ bracket, but I really don’t think it fazed the girls. We were confident in our ability to go out and score runs and win games. Like I said, I love this team.”

DOUBLE DUTY: McKenzie Morton, Gibbs junior, was in two Spring Fling events this year. She competed in the Division I pentathlon and placed fourth among the 13 competitors, totaling 2,290 points in the five events. Her most points came in the long jump, 800 run and high jump.

After that, McKenzie played on the Lady Eagles’ softball team and used her athleticism to score Gibbs’ lone run in the loss to Lexington.

SILVER GALORE: Ariya Rice, Austin-East senior, didn’t win in the Division I Class AA state track and field meet, but came close four times, placing second in the 100, 200 and 400 dashes and third in the long jump.

STILL STREAKING: Thanks to Farragut, Knox County now has a 21-year streak of having one of its teams reach the TSSAA state finals in baseball.

Only the coronavirus pandemic was able to interrupt that streak when it forced the TSSAA to cancel its spring sports championships in 2020.

Gibbs got it going again at the Spring Fling last year and defeated Pigeon Forge in the Class AA finals.

BOYS SOCCER: Christian Academy of Knoxville didn’t make it to Spring Fling this year, but the Warriors still lead the state in consecutive championships with five (2003-07).