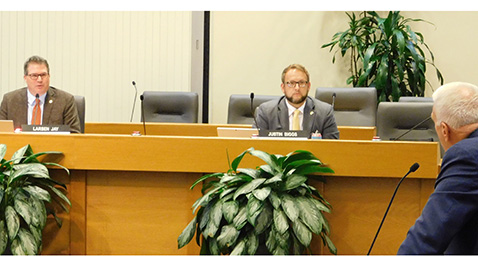 Why are the county mayor and some members of commission rushing the approval of a lease of the TVA East Tower for the Knox County School system? What’s the actual value of the Andrew Johnson Building, where the school system is currently housed?

How does the parking at the Towers compare to parking at the AJ Building? Is there a problem with the public visiting the TVA-owned building and what about TVA supplying the security there instead of the Public Building Authority?

These are all questions that came up during and after the Knox County Commission meeting last week. Commissioner Larsen Jay had a discussion added to the agenda “regarding the potential location move of Knox County Schools.” Jay called the proposed move “an opportunity to save $29 to $30 million and build more schools.” He called the proposal to sell the Andrew Johnson Building and relocate the administration offices to the TVA Towers a change that is “hard and inevitable.”

Knox County Law Director Richard (Bud) Armstrong cautioned the commission that the negotiations are “very complex” and much is still being negotiated. He also said that Mayor Glenn Jacobs has asked that the process be finished by the end of October.

Commissioner Michele Carringer asked if it is legal to “push the system out of our building.”

“It all has to flow together,” Armstrong said.

Commissioner Charles Busler asked School Superintendent Bob Thomas what he preferred and Thomas answered said he would like to have one site that is easy to access with no-cost parking. The superintendent said he hasn’t been consulted and the last time he was asked was “years ago, on the Rule site.”

“We’ve not asked the schools what they need,” Busler said.

Commissioner John Schoonmaker said that all legal documents are supposed to go to the Knox County Law Director’s Office.

“We’ve been told to leave our house that we own and go lease somewhere,” Thomas told the meeting, adding, “I’m not opposed but let’s get some real numbers. Let’s get some facts.”

Commissioner Larsen Jay and Superintendent Thomas got into a raised-voice exchange and Busler asked for a “Point of Order” saying, “They are bantering each other.”

Thomas said that Mayor Glenn Jacobs called him for a meeting and told him, “We’re reached a deal with TVA Tower, there will be a public announcement in a few days” and that’s the extent of it.

Jay said he asked the mayor’s office if the superintendent hasn’t been involved with the process. Jay said the conversations have been going on for ten years and especially the last two years.

“That’s what is confusing to me,” Jay said, adding, “I got a report back that said approximately 56 meetings have happened between the Knox County Schools and the mayor’s office and 30 of those meetings were with school staff, and you attended at least four of those meetings.”

“At what point did you make your opinion known?” Jay asked.

“I made my opinion known about moving to a location that really didn’t improve from where we were to where we’re going. There’s a difference in saying ’Here’s what we’re going to do to you’ and ‘what do you want us to do to you,’” Thomas replied.

“Nobody has ever said ‘what would be best, what are your concerns,’” the superintendent said.  “It’s been top down to me. The board has been totally left out of the conversation as far as I know.”

Apparently the idea of selling the Andrew Johnson Building and moving the school administration office to the TVA East Tower may or may not be decided by the school board and the county commission deadline of October 31.