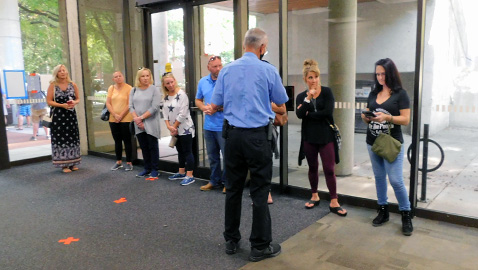 After a historic marathon meeting that stretched until 1:30 a.m. the Knox County Commission passed a watered-down resolution that, while critical of the Board of Health, has no power at all.

Commissioner Terry Hill, an opponent of restrictions placed by the Board of Health, said it best, “We’ve changed nothing.”

An earlier version of a resolution from Commissioners Justin Biggs and Kyle Ward attempted to restrict the Board of Health to holding an advisory role only, drop the mask mandate, end the alcohol curfew and have the board report to Knox County Mayor Glenn Jacobs.

However, because the Board of Health is empowered by the governor’s emergency orders it does not fall under the Knox County Mayor or Commission’s authority. The resolution in last Monday’s regular meeting contained phrases like “It is the intent” and “express the desire.” While the new resolution obviously expresses an opinion of displeasure in the way the Board of Health is operating it is just that — an expression of opinion.

On Tuesday Governor Bill Lee extended his Tennessee Pledge emergency order through October, giving Knox and other counties with a health departments the ability to continue their authority and regulations.

Mandated by the state and initially created by a past Knox County Commission the Board of Health does not report to either body. Knox County Law Director David Buuck said that without the board of health the Knox County Health Department Director, Dr. Martha Buchanan, would still be empowered to enforce restrictions.

Buchanan reminded the commission and the public that no legal action has been taken against people not wearing masks or against businesses violation COVID-19 regulations. Both she and the Board of Health, although they have the power, have called for no enforcement of violations.

During the eight and one-half hour long meeting, the Knox County Commission heard more than two dozen citizens speak, most of them calling for abolishing the Board of Health, restricting their power, or having the board defer to the commission and county mayor.

As the public forum debate went on some of the maskless speakers, who were supposed to be seated and speak from a podium in the balcony, came down to the main floor and walked through the audience there to speak before the commission. A few were loud and forceful. Chairman Larsen Jay reminded the speakers to wear masks and, at one time, asked the balcony crowd to be more respectful of speakers.

About 40 mask opponents were assigned to the balcony and others waited just inside the City-County Building for a turn to enter. At one point the Public Building Authority approached a half dozen of them and asked them to go outside because a complaint was made. They reluctantly went outside and joined the hundred or so protesters there. The outside protesters chanted and shouted so loud that it bled into the main assembly room meeting.

Probably the most noted speaker was Ashley Capps, founder of AC Entertainment, who bemoaned the pandemic’s cancellation of concerts, festivals and events. He called the loss of entertainment and events “sad, painful, and often soul crushing.” Yet Capps supported the efforts of the Board of Health, saying, “ I am asking you to support the Board of Health and empower them to make the decisions that will help us bring this crisis to an end as soon as possible, so that we can all get back to work and living the life we love.”

Some of the anti-mask speakers were critical of individual Board of Health Members. Chris Cruze said there’s no due process with the board, chastised board member Dr. Patrick O’Brien, thanked Mayor Glenn Jacobs, and called on the board to be “dissolved immediately.”

Dr. O’Brien addressed the meeting and reminded everyone that the Board of Health was established by state law. He defended the Five Core Actions as the reason Knox County COVID-19 cases have remained lower than other state metropolitan areas, and said the virus is never going away completely.

“We are the standard,” O’Brien said. He also said that not all of the recent business closings in the county are due to COVID-19 regulations.

When asked by Commissioner Charles Busler what can be done to end the divide between citizens in the county, Dr. Martha Buchanan replied, “Our leaders need to lead by example.” She said that the Board of Health decisions are based on evidence, data, and some compromise for the business economy.

The debate went back and forth with speakers and commissioners with Commissioner Richie Beeler saying that an appointed board should not create laws. He said the board “has kind of unlimited authority.”

Chairman Jay finally spoke on the resolution saying, “We are a nation of laws and we can’t ignore them.” He mentioned laws against child abuse, drinking while driving, theft, etc. and asked the other commissioners if, like the Board of Health safety mandates, they would choose to ignore those laws too.

Almost every commissioner chimed into the discussion, often with pointed questions or comments, and Busler called for the vote. The non-binding resolution, expressing the displeasure of the commission with the Board of Health, passed in an 8-3 vote.

Voting in favor of the commission’s finger-waving at the board were Commissioners John Schoonmaker, Carson Dailey, Justin Biggs, Smith, Ward, Hill, Busler and Beeler.

Voting against the symbolic resolution were Chairman Jay and Commissioners Courtney Durrett and Dasha Lundy.