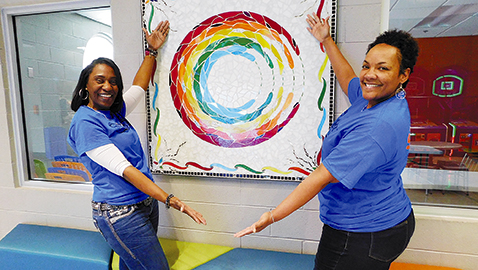 A $10,000 grant presented to the Change Center recently will be used for sports equipment for the hockey program and for basketball, said Nicole Chandler, Executive Director.

Zaevion Dobson was a 15-year old Fulton High School student and football player who died while heroically shielding friends from gang-related shootings in December 2015. His sacrifice has been noted nationwide from President Barack Obama at the White House to ESPN.

Zack, a little over a year older and also a FHS student at the time Zaevion sacrificed his life, is now a student at Middle Tennessee State University and will be going into his sophomore season as a wide receiver on the Blue Raiders’ football team. Zack now has a son too, Zion William, who will be 1 year old on April 11.

Zenobia Dobson, the mother of Zae and Zack and an older son, Markastin Taylor, recalled a recent tweet Zack sent out to his younger brother:

“‘I always thought that you would be here,’ and it has tears,” said Zenobia on March 30 at the Change Center, where she started working part-time in Admissions when it opened in December. “He has another season of football coming up, and this is kind of a difficult (time) for him. He’s at spring practice.”

Chandler was asked how the generous grant from the Foundation, which was started in 2016, can enhance the Change Center’s program and objectives.

“Because we are a safe and centrally located partnership facility, we work with other youth-serving organizations to provide recreation, job-skill training and development and job initiatives for teens and young adults,” she said.

“The Zaevion Dobson Memorial Foundation promotes and provides recreation and educational opportunities for our community, so it’s a great marriage between the (two) and we will use the funds for sports equipment for our hockey program and for basketball.

“Those will provide safe places, alternative recreation opportunities for teens and young adults that keep them busy and off the streets and gives them something to do during non-traditional non-school hours.”

Chandler also added: “It was an incredible honor to receive the gift and to be able to host the Skate for Zae Day here at the Change Center. It was a lot of fun. We had over 600 kids through the day. It was just incredible – the energy that day was amazing. Everybody just coming to celebrate the life of Zae. What he meant to our community and all whose life he touched.”

Chandler said she knew “Zenobia’s boys” when they were growing up.

“Zaevion had this infectious smile,” she recalled. “If you were having a bad day and seen him smile, you couldn’t help but have a better day.

“He was just so full of life. It was just his nature to do for others and to be protective. He always thought of others before himself. And so to be honored in this way with this grant in honor of Zack and in memory of Zaevion, it was an incredible honor for us and we were grateful that they thought of us to receive this grant.”

Zenobia said she thought long and hard about where the grant should go. “This is where I am and this is a part of me about Zaevion, so why not? I knew that his annual Skate Day was coming up. I just wanted to do something in his honor and that was the best thing I could do for him.

“When I asked Zaevion for his permission, I asked him about it. And he told me – Yes, I felt him patting me on the back. ‘I say Momma yes. That’s a great move.’”