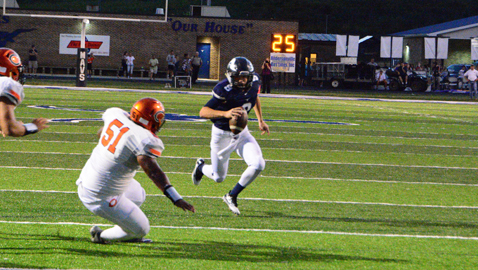 Sophomore quarterbacks Stanton Martin of Anderson County and Clinton’s Luke Harrison play on the same AAU basketball team, so maybe it was fitting their football teams put up a basketball-like score when they played each other Friday night.

The host Mavericks pulled away from Clinton with a fourth quarter stampede. Twenty-eight points in the final 12 minutes gave the Mavs a school record point total in their 71-43 victory.

Martin, a 5-9, 175-pounder, ran nine yards for AC’s first touchdown of the game, then threw a school record seven TD passes as the Mavericks continued their domination over their county rival.

Anderson County now has a win over the Dragons in each season dating back to 2000. The only interruption in the Mavs’ mastery was 2009 when they lost to Clinton in the regular season before beating the Dragons in the playoffs.

“Offensively, other than a couple of turnovers, we played flawlessly,” said Davey Gillum, Anderson County head coach. “The o-line didn’t play good at times early as far as the run game goes, but we really didn’t have to.

“Martin had a big night. He found all the open receivers. He made great throws. The receivers caught the ball well. It was a record-breaking night for us on offense. Our score could have been in the 80s, if it wasn’t for a couple of turnovers.”

Martin thought his best friend played a great game, too.

“Luke played phenomenal,” said Stanton. “Some of the passes he threw in there were amazing. We go way back. Shout out to him.”

Caleb Bethel was AC’s leading receiver with nine catches for 157 yards and two touchdowns. Michael Carroll and Thyshad Thrasher also had two TD receptions apiece. Everett Dews hauled in the other one.

Mason Phillips rushed for 125 yards and scored two touchdowns in the final quarter, including a 42-yarder to end the TD parade.

Every time the Mavericks scored, fireworks would fill the sky, fire would shoot up behind the end zone and sirens would sound.

“It was big play after big play and they had more of them,” said Clinton Coach Josh Kerr.

Harrison sparkled in defeat with 324 yards passing (31-46-1) and a pair of touchdowns to senior wide receiver J’Quan Thomas, who snagged 16 passes in all for 234 yards. Demarea Whitt added 11 catches for 68 yards.

Anderson County started the game with Bethel losing a fumble after a 12-yard catch on first down. Thomas raced 48 yards with Harrison’s first pass but was run down by Gavin Sickau at the AC 3-yard line and the Dragons would have to settle for a field goal.

Following a 59-yard pass to Bethel, Martin was ruled to have reached the goal line for a touchdown on a 9-yard run just before he fumbled the ball that a teammate recovered in the end zone.

Phillips and Chris Powell recovered fumbles for AC on Clinton’s next two possessions and Martin cashed in both with TD passes for a 20-3 first quarter lead.

Trailing 33-17 late in the first half, Clinton’s Long was stopped for no gain by Andrew Hatmaker and Doug Stooksbury on fourth-and-one at the AC 3.

“They have some athletic kids out there and we just got exhausted,” said Coach Gillum. “At halftime we got our legs back under us.

“Clinton has some really athletic receivers. I thought their quarterback grew up tonight and their coaches did a good job.”

Clinton cut the deficit to 36-33 in the first three minutes of the second half. Long ran off left tackle and scored from 41 yards out. On the ensuing kickoff, Ahmma Hardin stripped the ball out and Josh Breeden recovered at the AC 3. Thomas reached paydirt on the next play.

“When it was that close, I got a little bit worried,” said Martin. “We’ve got to go out here, I thought, and do everything we can offensively to rebuild that lead.”

Martin’s 7-yard TD pass to Bethel gave Anderson County a 43-33 lead and some breathing room midway through the third quarter.

The Mavs coughed up a fumble on a punt return at their 20-yard line and the Dragons got a field goal out of it to cut the deficit to 43-36 with one minute to go in the third.

Martin passed nine yards to Thrasher with 11:26 remaining to make it 50-36 and Marquise Gallaher’s interception return to the Clinton 18 set up Phillips’ first TD run that extended the Mavs’ margin to 57-36.

“We needed that little cushion (big fourth quarter) to make sure we secured the win,” said Martin.

Powell, with six solo stops and 13 assists, plus three tackles for loss and a fumble recovery, led the Mavs defensively.

Coach Kerr was proud of his team for battling back.

“It speaks volumes for these kids,” he said. “I’ll take a lot of the hits. We’ve got to make sure we eliminate those big plays. They’re a great group and they fight their tails off every night. My hat’s off to the way these kids fought back.

“There’s a lot of bragging rights around this game,” added Kerr, “that’s why this loss is tough for my guys to take. But they have to realize the season’s not over. We’ve got to fight back. “We’ve got a big region game coming up. We’ve got to move on and get ready for Lenoir City.”

Anderson County, meanwhile, will play at Knoxville Catholic in Region 2-4A Friday night.