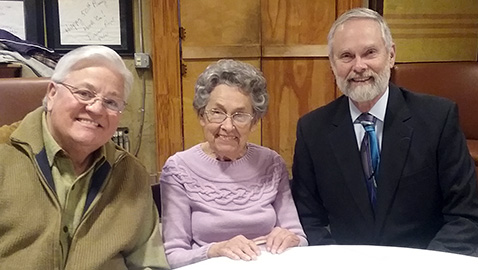 Mary Grubb Hickman celebrated her 92nd birthday at a surprise gathering on Saturday, January 26. Thinking she was going for an intimate birthday dinner with long-time friends, state Representative Dave Wright and wife, Pat,  Mary brought her famous Hummingbird Cake to share with her friends after their meal.

“Mary is so gracious and generous that you can hardly do anything for her without her trying to repay the kindness,” Pat Wright told The Focus. “So when she told us that she was going to bring a cake for us to enjoy after dinner Dave told her that would be just fine.”

When they arrived at her favorite restaurant, Litton’s, the back room was filled with family, church and community friends all of whom enjoyed a slice of her cake after a great meal.

Mary Grubb Hickman shared fond memories of being born and raised in the Corryton community. Granddaughter of the late M.D. Grubb, who once owned Little Flat Creek Dairy, she talked of her politically active grandfather who doted on his grandchildren, renting a cabin in Tinzel Springs for the family to gather during the summer and always keeping an ice cold watermelon in the well for hot summer afternoons.

Mary’s dream was to be an airline hostess after graduation but her father refused to sign the permission papers fearing that she could someday come to harm. A week after his refusal, the FBI while visiting the high school took interest in her skills and offered her a secretary position in Washington, D.C. after graduation. While in the position, she became friends with J. Edgar Hoover’s secretary.  A highlight of her career was while visiting her friend, President Truman came through and shook her hand and spoke to her.

Mary eventually left Washington to return to Corryton and reconnected with classmate Don Hickman who had returned home from the Navy. The two married moved away for his business but returned to Corryton after retiring. She and her late husband raised three children,  Charlie, Ray and Sheila, and have four grandchildren and one great-grandchild.