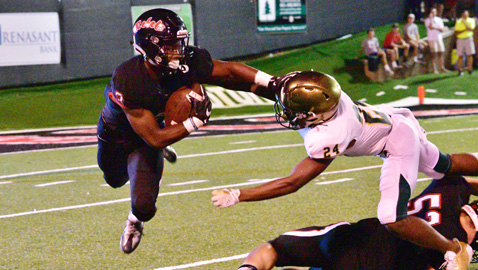 But the Red Rebels, playing their first game under new head coach Derek Hunt, pulled out a 49-42 win over the visiting Irishmen.

It was Maryville’s 91st consecutive win over a team from Knox County, dating back to the 2000 season. Halls was the last Knox County team to beat Maryville, posting a 21-14 victory in 2000.

“Both teams played extremely hard,” said Catholic Coach Steve Matthews Saturday. “Maryville made the plays in the end to win.

“We have some mistakes we need to clean up, which we’ll work on this week,” added Matthews. “Dashon Bussell was outstanding for us with three touchdowns on the night.”

Bussell had touchdown runs of 64 and 67 yards and also caught a 57-yard TD pass.

Catholic led 28-21 at halftime and was up by 14 points on two different occasions in the showdown of state powers.

Isaiah Cobb’s 1-yard touchdown run with 1:29 remaining in the game lifted Maryville to the victory. It was Cobb’s fourth TD run of the game.

The Irishmen play at Chattanooga Baylor this week.

“It was a great team win on the road to start the season,” said Bryson Rosser, Central head coach. “We grew up in all facets of the game. Our quarterback, Dakota Fawver, had a great game. Jalynn Clemons and Xavier Washington led the way on defense.”

Karns lost a 41-34 thriller at home to Cocke County. The Fighting Cocks knocked down a Karns pass in the end zone on the final play of the game.

“Offensively, we moved the ball, and had several young men make plays for us,” said Karns Coach Brad Taylor. “We just needed a couple of stops defensively that we didn’t get.

“Hats off to Cocke County. They played hard and physical. We are very pleased with the way we competed all the way to the end. We can build of that kind of effort.”

The Beavers will try to bounce back this Friday against Halls.

“Halls is coming off a tough loss to a much improved Powell team,” said Taylor. “They will be eager to get back to the winning they’ve become a accustomed to. They will be a tough opponent.”

Meanwhile, Fulton will play its season opener Friday at home against Central in the Battle on Broadway.

“We are really looking forward to our opener with Central,” said Rob Black, Fulton head coach. “They are a talented bunch. We will have to play disciplined football in all phases of the game.

“The Fulton vs. Central rivalry goes way back. This game should provide plenty of electricity and with no doubt be worth the price of admission.”

Other games involving local teams in Week 2 include Brainerd at Austin-East, Seymour at Clinton, Cherokee at South-Doyle, Powell at Cumberland County, Cleveland at Bearden, Farragut at McMinn County, Concord Christian at Lookout Valley and Greenback at CAK.