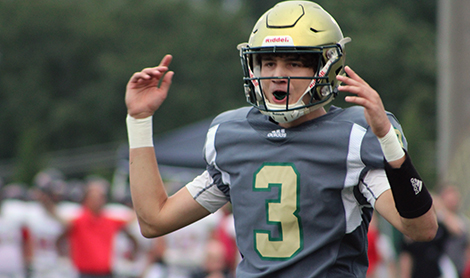 It was a matchup between a pair of state football champions to open the 2018 season and it lived up to its billing.

At least until Maryville scored 24 unanswered points to pull away from Catholic and capture a 31-10 victory over the Irish Friday night before a capacity crowd at Blaine Stadium.

Catholic, the defending Class 5A State Champion, got out of the gate fast. The Irish scored first when freshman wide receiver Tommy Winton scored on a 9-yard run with 8 minutes, 28 seconds remaining in the first quarter. Kicker Paxton Robinson added the extra point to make the score 7-0. Winton was the offensive star for Catholic as he rushed for 17 yards and a TD. He also had nine catches for 93 yards.

The Rebels, however, would respond quickly. Maryville, which has won 159 of its last 162 regular-season games dating back to 2002, engineered an eight-play drive that covered 67 yards. The culminating play came when Rebels quarterback Braden Carnes hurled a 36-yard pass to Brayden Anderson with 4:46 left in the opening frame. Kicker Jack Cone knotted the game with the PAT.

After slugging through an even inaugural stanza, the Irish (0-1) took a 10-7 advantage when Robertson booted a 25-yard field goal and this looked to be a heavyweight battle.

But the defending Class 6A Champion Rebels had other ideas.

Maryville, which used two quarterbacks on this night against the Irish, took a 14-10 lead when Bryson Teffeteller scored on a short 11-yard touchdown scamper midway through the second quarter. Teffeteller’s scoring run capped a seven-play, 68-yard drive that took just 1:30 off the clock.

The Rebels (1-0) would add one more score before the end of the first half when Cone kicked a 40-yard field goal as time expired, making the score 17-10. The kick was set up when Carnes connected with A.J. Davis on a 34-yard completion.

Catholic appeared to capture a bit of momentum after halftime but the Irish, who host Chattanooga Baylor this week, were turned away on fourth down twice on consecutive drives.

“That’s frustrating when you get the ball inside their 5-yard line twice and you don’t score, when you don’t come away with any points,” Catholic coach Steve Matthews said. “We’re very young and we’re just not a very good football team right now. But we will be. I promise. We started 0-1 last year but we won a state championship.

“Maryville is Maryville and they won the game and coach [Derek] Hunt does a great job with his team.”

Carnes and fellow junior Cade Chambers both made big plays at quarterback for the Rebels on Opening Night, 2018.

Still, Matthews commended the play of his defense.

“I’m really proud of her defense. Sure, we gave up 31 points but the battled,” Matthews said. “When the offense isn’t doing anything, it’s hard for the defense to keep going back out there.”

Tee Hodge scored on a 1-yard plunge in the third quarter to make the score 24-10. Teffeteller closed out the scoring with a 4-yard run in the final frame.