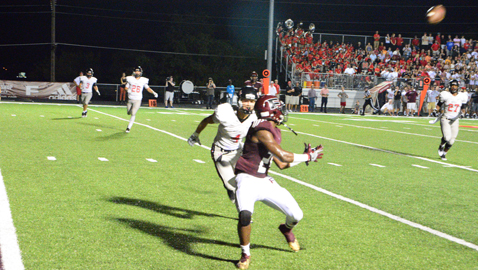 Zaevion Dobson made the ultimate sacrifice in the game of life and the Fulton High football team, which includes many of his teammates, honored him with extraordinary effort in the Battle of Champions Saturday night, Aug. 27. Even though it didn’t result in victory, it was a performance in which Zae could have been proud.

The inspired and emotionally charged Falcons bolted to a 14-0 lead early in the second quarter, but mighty Maryville withstood the flurry and eventually wore down Fulton 45-29 for the win at Bob Black Field.

A television audience and a full stadium of fans watched the two 2014 state champions and perennial powers – Maryville in Class 6A and Fulton in Class 4A – square off for the second year in a row and compete in the first game ever played on the Falcons’ new artificial turf.

Maryville prevailed in last year’s first meeting 49-18. Head coaches of the two programs – Fulton’s Rob Black and Maryville’s George Quarles – have said they would like to continue the series starting next season.

Prior to the game, Fulton officially unveiled the number 24 that has been permanently painted on its new turf at appropriately the 24-yard line. That was the number Dobson wore as a sophomore last season not long before he was shot and killed in December as he tried to shield two girls from gang gunfire in the Lonsdale community.

Since then, Dobson’s act of heroism has been recognized nationwide and he will continue to be remembered this season as players of teams across the country wear memorial emblems in his honor.

“We play every game for Zae and tonight would have been a great win to have,” said Chaton Mobley, senior fullback and inside linebacker and a good friend of the fallen Falcon. “Coming into it, we knew we had a great chance to win. But with just about everybody playing on both sides of the ball, fatigue set in. It wears on you.”

While Maryville did not have a single player start both ways, Fulton had six that did. There also were six other Falcon starters who served as backups on the other side of the ball.

The wear and tear of trying to stop Maryville’s hard running Jordan Ervin added up. The Red Rebels’ strong 5-7, 185-pound senior, who was knocked out of last season’s game against Fulton late in the third quarter, rushed for four touchdowns and caught a 33-yard pass from quarterback Dylan Hopkins for another. His TD runs covered 9, 1, 13 and 4 yards. He finished with 176 yards on the ground.

When the Falcons were fresh, they were at their best. Mobley greeted Maryville’s first offensive possession with a sack and then a tackle for loss when the Rebels boldly went for a first down on fourth-and-eight at the Fulton 41.

The Falcons gained seven yards in three plays before the game was delayed for 30 minutes (8:15 p.m. to 8:45) because of lightning. When play resumed, a Fulton punt was downed at the Maryville 3.

Isaiah Cobb had a long touchdown run nullified by a block in the back penalty on Maryville’s second possession. Ervin came right back with a 40-yard romp, but rugged linebacker DeShaun Page then introduced himself to the Rebels’ offense by throwing Cobb for a two-yard loss on third-and-four.

After a short Fulton punt, Maryville’s third possession started at the Falcons’ 37, but the Rebels couldn’t pick up a first down. Mobley and Page both made big plays and a fourth down pass fell incomplete.

Fulton’s offense went to work. Junior running back Dorian Williamson gained 15 yards on a screen pass and ran for 14 more to the Maryville 38. Mobley powered 19 yards to the 19 and spun into the end zone from 17 yards out. Nana Boateng’s extra point kick gave Fulton a 7-0 lead with 32.8 seconds left in the opening quarter.

Fulton’s defense turned it up a notch. A strip by free safety James Davis and Nigal Davis’ recovery of A.J. Davis’ fumble got the ball back at the Maryville 27. Quarterback Xavier Malone hit Zack Dobson, Zaevion’s brother, on the next play for a touchdown. The PAT kick made it 14-0 with 11:39 on the second quarter clock.

But it wouldn’t get any better for the Falcons as Maryville scored the final 21 points of the half.

Both head coaches agreed the play of the game came after a sharp backward bounce resulted in an 11-yard Maryville punt that put Fulton in scoring range with a 14-7 lead. But on a routine carry up the middle by Williamson, Maryville’s Trejuan Purty suddenly emerged with the football, having cleanly snatched it away from the ball carrier before he was down, and ran from his 15-yard line to the Fulton 49.

On the first play after the huge turnover, Quarles called for a trick play. The Rebels ran a reverse, wide receiver Christian Markham pulled up and threw a pass back to QB Hopkins, who ran to the 20 for a first down.

An intentional grounding penalty pushed Maryville back to the 31, but Ervin bounced off a Falcon defender after catching a pass and scored the tying TD.

Thanks to a Fulton punt that deflected off one of its own players, Maryville got the ball back at the Falcons’ 22 with 1:12 remaining in the half. On third-and-13, Hopkins hit Markham for a gain of 23 yards to the 2. With only 7.2 seconds left and no timeouts, Coach Quarles chose to go for six instead of three and Ervin knifed across the goal line from the 1, giving the Rebels a 21-14 advantage.

The Falcons had lost their momentum.

Matthew Cone, who kicked all six of the Maryville PATs, booted a 21-yard field goal to extend the Rebels lead to 24-14 at 8:06 of the third quarter.

Zack Dobson immediately gave Fulton new life, catching a pass from Malone and racing 80 yards for a TD. On the PAT, the snap was dropped, but holder Michael Hobby scooped it up and ran for the two extra points to pull Fulton within two (24-22).

Key first down catches by tight end Blake Watson and Markham led Maryville’s ensuing 68-yard scoring drive that made it 31-22.

Fulton failed to answer this time.

On the first play of the fourth quarter, Hopkins had to tuck and run when his tight end was covered, but he gained 30 yards down the middle to set up Maryville at the Fulton 13. Ervin streaked into the end zone two plays later. That made the difference 16 points (38-22) with 11:21 left.

A muffed punt gave Fulton an extra possession, but the Falcons still couldn’t cut into the deficit.

A twirling 16-yard scamper by Cobb gave the Rebels their final touchdown and a 45-22 lead with 5:42 remaining.

Fulton didn’t quit, adding one more score when DaShaun McKinney caught a 36-yard pass from Hobby, the backup QB. The Falcons even pounced on a fumble at the Maryville 19-yard line with 3:35 to go but couldn’t cash in.