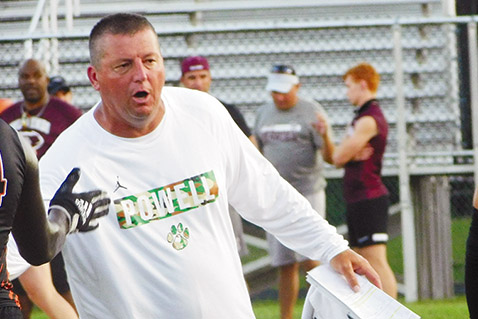 The Panthers, who went 10-2 and won the Class 5A State Championship in Chattanooga in 2021, have 14 returning players who saw significant playing time last season.

Senior and three-year starter Jordyn Potts is back at quarterback and will be the field general for Powell’s offense. He also has plenty of experienced weapons returning.

One key piece from last year, however, will be missing as offensive coordinator Josh Jones left after three years in the program. He’s now the head coach at Bearden High, where he replaces Morgan Shinlever.

“I’m the offensive coordinator for now,” said Lowe, who has spent the majority of his head coaching career, which includes a pair of stints on West Emory Road and a tenure at The King’s Academy. “Josh and I had three years together.

“Now that Josh has moved on, I’ll be calling plays. I’ve had fun the last three years. But there’s good and bad about both.”

Lowe may be calling plays by necessity in 2022 but he has mixed feelings about assuming a hands-on role with the offense.

“It’s safe to say that I like to call plays on Friday night, but what happens Sunday through Thursday, I don’t really like that.”

Regardless of who’ll be calling the plays, Powell has a talented group of skilled players, including Potts (who recently committed to Tennessee Tech) and wide receiver Ayden Greene, a two-way player who also impacts the Panthers’ secondary. He was coveted by Tennessee and other Power 5 schools but committed to Cincinnati.

Jason Foust and Adarius Redmond are also back at wide receiver and Gianni Magdos returns at running back.

Up front on the line, Byron Finger, Jahkye Irby, Warren Nolen, Blake Neely and Jesse Massengill are also back.

The 2022 football season is looming and one local team has eyes on a second consecutive state championship.

But the Panthers, who won Region 3-5A with a perfect 5-0 league record, aren’t resting on their laurels and complacency hasn’t infiltrated Powell’s program.

“I think our kids have a chip on their shoulder because they want to prove that last year wasn’t a fluke,” Panthers’ coach Matt Lowe said. “Our kids just want to play.

It’s always hard to stay on top and repeat as a state champion but Powell faces a tall order if it is to get back to Chattanooga and the Blue Cross Bowl.

Competing in Class 5A in Tennessee, particularly in the Knoxville Area, is extremely difficult as both local regions are stacked with perennial playoff contenders.

“When you play (Class) 5A football in Knoxville, you have to bring you’re A-game every night or you’re going to get beat,” said senior quarterback and three-year starter Jordyn Potts, who recently committed to play college football at Tennessee Tech. “You just don’t get any nights off and you don’t have any easy games.”

“When you play (Class) 5A football in Knoxville, you know that somebody from here is going to represent East Tennessee in the state championship game,” Lowe said. “We don’t have any easy games in our region.

“Karns has one of the best running backs around (in DeSean Bishop, a senior who recently committed to Coastal Carolina). Clinton is a team on the rise. Oak Ridge is always tough and Campbell County can put points on the board, 100 percent.” In the other region, you have good teams like West, Halls, Central and Sevier County.”

Lenoir City is also in the league and Loudon County’s Panthers have a new head coach as Gary Dugger replaces Jeff Cortez.

Powell’s region schedule will obviously provide its share of challenges. The Panthers, however, have a stacked non-region slate and they will be tested early.

They open with a road tilt at Anderson County on Aug. 19. The Mavericks are no strangers to deep postseason runs.

Powell then faces Class 6A state powerhouse Maryville at Scarbro Stadium in a Rivalry Thursday showdown on Aug. 25.

“Our first two games are going to be tough. We have Anderson County and then we get Maryville at home,” Lowe said. “We played out there last year and the game was on TV and we hung in there in the first half.”

Powell also has non-league games against Halls (Sept. 23) and Catholic on Oct. 21.

The showdown with the Red Devils will be for Emory Road bragging rights and the Irish have hopes of winning a state title in Division II-AAA.