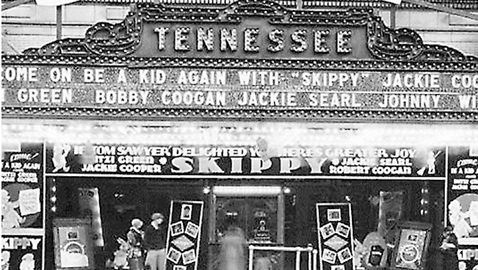 Yes, the sign went back up and once again the proud and historic Tennessee Theatre on Gay Street downtown has its name proudly and more brightly lit. The majestic theatre has a long history of film and live events that continue today as Hal Holbrook will be there later this month and Bob Dylan performs in October.

Yet, as many times as you may have been to the Tennessee or passed it while walking or driving downtown there’s probably a lot you don’t know about that building.

For instance the “T” and “E” were removed from the theatre’s marquee in the 1999 film “October Skies” when Jake Gyllenhaal as Homer Hickman walked downtown “Indianapolis.” The sign simply read “ENNESSE.”

She said an early newspaper employee kept a note of all the different marque postings and discovering that, thanks to the person’s relative, helped supply some history.

“Five different national theatre chains have owned it over the years,” she said.

Many people don’t realize that the stage is actually two stories up from the floor and in early years all the props, steamer trunks, and even animals for performances were raised by block and tackle by mule from the back of the building on State Street.

“The tale is that when a mule died they stopped loading that way,” she said.

When Tom Mix, the early movie cowboy, brought his rodeo circus there in 1933 all the animals and equipment had to enter through the front door.

As the Tennessee was being built, silent movies were being shown but by the time it opened in 1928 “Talkies” were available. The soundtrack of the films were on  Vitaphone records and were played in sync with the movie. The organ was used, then, only for pre-show entertainment.

The first movie to play the theatre was “The Fleet’s In,” starring Clara Bow.

The theatre began as a section of the Burwell Building and became the first building in Knoxville to be air conditioned. It had 2,000 seats and the interior was designed in the Spanish Moorish style but with elements reflecting various places from around the world that included French-style chandeliers.

Major renovations over the years were uncovered and restored and in 2003 and efforts were taken to restore the interior close to the original design. It had been refurbished in 1966 with new carpet, a larger concession stand, decorate mirrors and a fresh coat of paint. The seating was upgrade this year as well.

The theatre now has an elevator and bathrooms upstairs.

Hancock said the original projection room was encased with bricks to fireproof it because films back then were nitrate based and very flammable.

While the theatre is known for its live performances movies are still shown on special occasions. “It’s a Wonderful Life” plays during the Christmas season and “The Rocky Horror Picture Show” always draws a crowd of fans who often dress as a character in the movie.

“I’m committed to continue to show movies. That’s our history and an affordable way for people to see our beautiful interior and introduce kids to the theatre,“ Hancock said. The theatre occasionally partners with the city or groups like the Boys & Girls Club for events.

Hancock says she works several months out, setting up Broadway productions on the calendar first and then dates for the Knoxville Symphony and Opera. She said that performers, like Dylan or others, fill in the dates around the other events.

The theatre can also be rented by promoters or organizations.

The marquee and upright sign were upgraded by the Pattison Sign Group with 5,700 new LED lights and sockets installed, the electric lines replaced, cosmetic damage repaired and new paint was added. The current signs were created during the theatre’s $28 million restoration in 2005.

You can get more information on the unique Tennessee Theatre at www.tennesseetheatre.com or by calling (865) 684-1299.