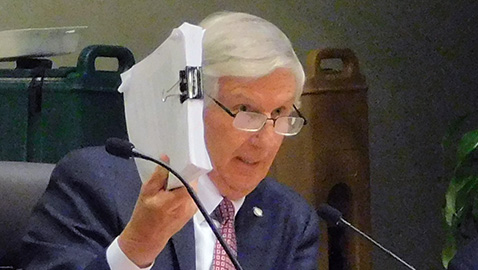 Knox County Mayor Glenn Jacobs brought out the big guns last week in his pitch to get the approval of the Knox County Commission for an easement agreement for the TVA East Tower. Jacobs called a special session and lined up people from various agencies and organizations to promote the idea.

“This is an opportunity to save thousands of dollars,” Jacobs said. He called the agreement a “complicated proposal” and said he is providing as much information as possible.

Those speaking for the proposal included appraisers, realtors, title insurers, and spokespeople from the Knoxville Chamber, the Public Building Authority, the County Finance and Purchasing Departments, and the University of Tennessee. Each presentation was accompanied by a graphic presentation. The county mayor spoke twice after Commission Chairman Hugh Nystrom reminded the other commissioners that there would be no vote during the meeting. Nystrom  told The Focus that he hoped most of the discussion and questions would be resolved during the called meeting and not during Tuesday’s Work Session.

The takeaway from the meeting is that Jacobs intends to go ahead with the agreement pending commission approval, even if the board of education turns down relocating to the TVA East Tower. The sale of the Andrew Johnson Building, currently housing the school administration, has been postponed until February, following a decision this month by the school board and the commission.

That had been on the work session agreement today.

Only six of the commission members commented or asked questions. Most of the questions came from Evelyn Gill, Randy Smith, John Schoonmaker, Larsen Jay, Justin Biggs and Charles Busler. Several of the questions were obviously in support of the deal and several were in opposition.

Questions from Gill and Busler centered around security at the TVA Towers, which would be supplied by TVA or a TVA-contracted company.  Busler focused on the requirement to have a badge or the new special driver’s license, the REAL ID, to enter the TVA Tower. He said it inhibited parents or others wanting to visit with the school administration from entering.

The response was that those visitors would be taken to special meeting rooms on the first floor and the person they wished to see would be asked to come down to meet with them.

It was also learned that school employees who could not pass a federal investigation would not be permitted to work in the Towers until they were cleared.

At one point Biggs called on Superintendent Bob Thomas who said the move to the Tower would save the school system $1 million each year. The mayor’s proposal specifies the county will cover the cost of the move and the school’s expenses there. The new furniture and the move would come to about $5 million and the county, not the school system, would own the furnishings.

Biggs also asked if the Andrew Johnson Building is sold could it be resold the next day by the buyer. The answer was “Yes” if the new buyer promises to convert the building to apartments and a hotel as promised.  Gill asked if the buyer of the Andrew Johnson Building will be asking for a tax break and the answer was “Yes;” A payment in lieu of taxes request had been already asked for. That would freeze taxes on the current purchase price until the unspecified tax break ages out.

Smith asked the superintendent if he plans to support the move at the board of education meeting Wednesday and Thomas answered he was.

Finance Director Chris Caldwell Mayor Jacobs spoke of the “Plan B” they would pursue if the commission turned down the proposal. In Plan B, the county could move out of the City-County Building to the Towers and also bring in other county offices, selling the county-owned property.

Another problem within the proposed agreement is that Mayor Jacobs could go back and make changes to the document after commission’s approval.  Proponents said the details Jacobs could change “would be minor.”

Schoonmaker suggested adding a time limit on final agreements and, if that’s not met, the matter could come back to the commission.

Jacobs said the agreement with TVA is “a fraction of the market price” of the building and much lower than any other similar sized building downtown.

Tonight will probably see more discussion and final vote may come in the commission’s regular meeting on Tuesday, January 21.