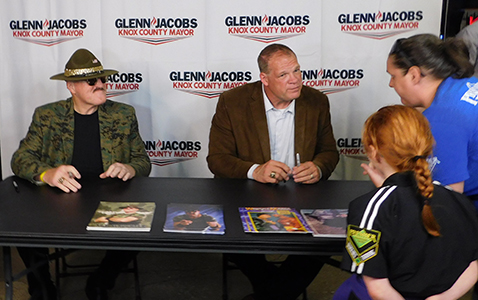 The sounds of 1990s country music blared from the stage as Gone Country covered the songs of Dwight Yoakam, the Kentucky Headhunters, Brooks and Dunn and the songs of other neo-traditional music from the era as a local politician threw a party to encourage citizens to get out and vote in Knox County’s upcoming August election.

Knox County Mayor Glenn Jacobs hosted a party to urge voters to make their way to the polls for early voting, which began Friday and runs through July 30.

But for many who attended Tuesday night’s event at Cotton Eyed Joe nightclub in West Knox County, it was about more than the upcoming election as Jacobs enlisted the aid of one of his old buddies from the world of professional wrestling.

Former WVLT Alan Williams was the emcee of the party.

Jacobs hosted the event along with World Wrestling Entertainment Hall of Famer Sergeant Slaughter, but it was Zachary, who was the loudest political voice on this night.

“I don’t think some people understand just how important the Aug. 4 election is,” Zachary said. “It is Tennessee’s primary election, but it is (also) Knox County’s general election.

“You need to get your butt out and vote.”

Jacobs, who addressed the crowd briefly, said the event was intended to be informal.

“This is not really a political event,” Jacobs said. “We’re here to promote early voting, but we also wanted this to be a party atmosphere, and here we are. And what better place than Cotton Eye Joe?”

Sergeant Slaughter, who is one of only two living people to have a GI Joe action figure and is a member of the GI Joe Hall of Fame, made it no secret that he supports Jacobs’ re-election bid.

“I finally made it to Cotton Eye Joe in Knox County,” said Sergeant Slaughter, aka Robert Rudolph Remus. “You elected a good man to be your mayor and hopefully, you’ll elect him again. Don’t make me come after you.”

After the political portion of the event concluded, Jacobs, aka, Kane, greeted fans and signed autographs.