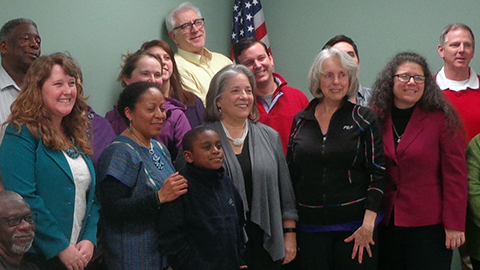 Knoxville Mayor Madeline Rogero spoke at the Neighborhood Advisory Council’s monthly meeting Wednesday afternoon and answered a number of questions. The questions ranged from what will happen at the terminus of James White Parkway to safety at the Behavioral Center just off Western Avenue.

Rogero recalled the history of the advisory council and the hiring of Director David Massey and Assistant Director Debbie Sharp, both of whom she said are doing a “fabulous job.”

“You have an important role,” she told the council members, who advise the administration on issues.

When asked about plans to create a terminus area at the end of James White Parkway, Rogero said that plans are in the “design process” and the city is in final talks with the Tennessee Department of Transportation on what and how to do a parking area there. The Parkway was discontinued a few years ago for the protection of the Urban Wilderness.

Rogero indicated that plans there could include a kiosk, bathrooms, and possibly a building.

“All of this is still in negotiation,” she said adding that before a final decision is made, several public meetings will be held.

She also said that a future streetscape for Chapman Highway is being discussed and “is on the radar” noting that the highway is state property but she sees it as “our next streetscape project.” She noted that the city did get bike lanes added to the Henley Bridge giving access to the developing South Front Waterway paths.

Regarding the Magnolia Streetscapes Project, Rogero said the city is ready to seek bids and work should be underway this spring or summer, adding she wants to cut some more opening ribbons before she leaves office next year.

When asked about the possibility of hiring the homeless to pick up trash, Rogero said the city had already done this around Broadway but not citywide. She noted that the city is trying to create a “space to help” the homeless beneath the I-40 bridge on Broadway and noted the various programs already in place to help that population.

“We’re kind of watching,” she said of similar programs in other homeless being paid to collect litter.

Asked about affordable housing the Mayor said Knoxville does have a problem but not as large as some other cities.

“It’s not a crisis but we definitely do have a problem,” she said. She mentioned several programs offered by the city and referred questions to city departments. Rogero said the need for more affordable housing was a main topic of the recent City Council Retreat and noted that the “Round UP” KUB program does help create housing.

She also mentioned that some neighborhoods have objected to low-income housing being developed in their area and asked neighbors to “step up” and support the need for such housing.

Barbara Cook of the Northwest Community spoke up again about concerns about safety at the Behavioral Health Urgent Care Center on Dewine Road.

“We have a commitment to the safety of our neighborhood,” she said, referring to the facility as a place that would treat walk-in patients as well. She also said there’s no procedure in place to warn the neighbors if someone escapes the facility.

Rogero again explained that only non-violent people arrested for minor offenses would be taken there by law enforcement and, when they leave, would be taken away from the facility the same way.

“We are trying to get these people treated and cured,” she said and then told Cook that the city will meet again with the nearby neighbors on the matter.

“An appropriate level of attention to detail will be addressed,” Rogero said.

Other questions ranged from opioid addiction to retrofitting all 30,000 city street lights with LED lights. Rogero said the LED lighting will pay for itself in 7 to 8 years because the lights use much less energy.