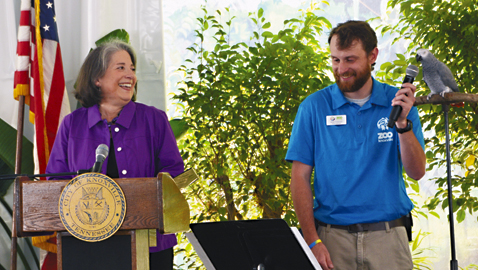 Although the city may adopt a budget that is 4.5% above this year’s figures there’s no property tax increase proposed for next year.

One of the bouts of applause during Knoxville Mayor Madeline Rogero’s “State of the City” address Wednesday at Zoo Knoxville came when she announced she is asking the City Council to approve $200,000 as the city’s part in a program for pre-arrest diversion of people with mental health and substance abuse issues.

Knox County Mayor Tim Burchett announced earlier this year that he has set aside $1 million for creation of the “Safety Center” and proponents of such a diversion treatment center have been waiting some word from the city on the issue.

Rogero said the city is “at the table with the county” and the city funds would be for the operation of such a center.

“I’m happy for the announcement from the mayor for $200,000,” said Safety Center committee member Vivian Shipe. The community activist added, “We have begun. Next we will create a cost analysis so we can see what this center looks like.”

Also within the proposed city budget of $302.68 million is $4 million for the Magnolia Avenue Streetscape Project from Jessamine to Bertrand Streets, $250,000 for the new recreation and jobs center called the “Change Center” on Harriet Tubman Street, and an additional $50,000 for the Save Our Sons program.

A public budget hearing is set for May 17 after the City Council has a first reading on May 10th. The council could adopt the current or changed budget in their June 7th meeting.

Rogero said the budget would “triple our investment in youth programs.”

Speaking of the Safety Center Shipe offered the following to Knoxville Focus Readers:

“The hardest part of any undertaking, especially when it has never been done before, is taking the first step. For over eight years we have been trying to take that first step in regards to a SAFETY CENTER for the mentally ill.  There has been a great need for communication among all parties to respond to the desperate need for our most vulnerable population.

“This huge step on the part of the city of Knoxville has taken great courage and strengthens all the links and further encourages the community as we move forward to fill this void. We are greater together. I am encouraged by this first huge step by the city of Knoxville and look forward to developing the process with the mayors, our representatives on city council and commission, the community, the citizens, and those who have no voice.

“There is so much more we have to do together from this point until we no longer fill our jails with those who have done no wrong.”