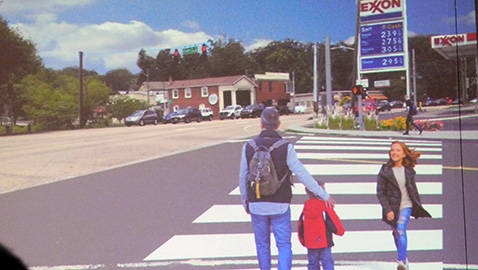 What is and what could be was the topic of a presentation at the Fountain City Town Hall meeting recently. Landscape architect Garry Menendez used a PowerPoint presentation to relay some of his ideas about the hub area there, emphasizing walkability and improvements on existing streets and access to Fountain City Lake.

Menendez, a Harrill Hills neighborhood resident for 35 years, is a UT professor and has a small private landscaping company.

Fountain City Town Hall welcomed a large crowd to the organization’s membership meeting  and introduced Menendez as someone who shares ambitious but attainable goals to improve the local quality of life.

“I’ve traveled around a lot but when I land north of I-640 and south of Black Oak Ridge I kind of smile and say, ’This is where I belong,’” Menendez said, adding, “Because of that I feel like giving back and try to do some things we do. We have an amazing part of the city.”

He shared two themes for his vision of improvements in Fountain City: Connect and Attract.

“We want to attract people who can get here safely and not necessarily to hop in a car to do it,” he said.

Menendez said some of his ideas get the response, “That can’t be done — it’s too expensive” and then went on to talk about similar and grander improvements on Cumberland Avenue, Happy Holler, and elsewhere around Knoxville.

“I’m looking for a few volunteers because there are some places in Fountain City that need our love,” he said, adding, “One of those is the lake and the wetlands there.”  He said that black willow trees have taken over and need to be removed or trimmed back.

Another place needing attention, he said, is the library, where vandals have taken part of the statue there and it needs repaired or replaced.

One of the ideas Menendez suggested is creating a walking path from the small downtown section on Hotel Avenue where the Creamery used to be to Fountain City Lake. He showed various versions of creating a footpath or sidewalk between the buildings leading to Church Street and the lake. Along Church Street is also suggested outdoor seating, farmers market and vendors or food trucks on the weekends.

“There needs to be a connection between the park and the lake,” he said, adding that he has talked with a property owner there about the idea.

He also suggested removing the overhead electric lines for a few blocks along Broadway there and placing new crosswalks to give access to the Fountain City Park midway along Broadway.

A sidewalk to connect Litton’s Restaurant to the library on Essary Drive was also shown in the PowerPoint presentation as a possibility.