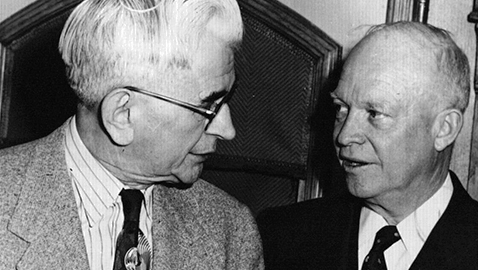 In February of 1945, a war weary and sick Franklin D. Roosevelt was on his way to Crimea in the Soviet Union.  Technically in the Ukraine, the Crimea is on a peninsula on the northern coast of the Black Sea and was once the playground of the Russian Czars and other royalty and nobility.  After the slaughter of Czar Nicholas II and his family by the Bolsheviks and the Russian civil war, the Communists ruled the Soviet Union with an iron fist.  Dictator Josef Stalin signed a treaty with Adolf Hitler, his counterpart in Nazi Germany.  Hitler’s word was as good as Stalin’s and the German dictator caught Stalin unawares when he launched Operation Barbarossa on June 22, 1941, pouring into the western part of the Soviet Union the largest invasion force ever gathered together in the history of warfare.  Stalin, as bloody a tyrant as Hitler, killed more of his own countrymen than the Germans, estimated at 27 million.  The German war machine, once seemingly unstoppable, was sputtering to a halt, squeezed between the American and British armies in the west and the Red Army in the east.  President Roosevelt had hoped to meet elsewhere, but Stalin refused to leave Soviet territory and finally agreed to meet at Yalta.  Former palaces, only recently abandoned by the retreating Germans, were being quickly refurbished for use by the “Big Three” – – – Roosevelt, Stalin and British Prime Minister Winston Churchill – – – as they met to discuss the unconditional surrender of Germany and the Japanese Empire.  One of the key questions considered at Yalta by a failing Franklin Roosevelt was the future of Poland.  FDR told Stalin Polish-Americans were an important voting bloc in American elections.  Roosevelt, a very sick man at the time, firmly believed his personal charm would enthrall the flinty Russian dictator and allow him to deal with Stalin.  The Second World War had erupted over the German invasion of Poland when England and France had declared war upon Hitler’s Nazi Reich.  As the Germans retreated westward, the Red Army swallowed increasingly large chunks of Poland.  As Churchill pushed for recognition of the democratic Polish government in exile, residing in London, it became readily apparent Stalin much preferred a puppet government run by Communist Poles.  Roosevelt delicately tried his best to nudge the Russian dictator, but Stalin refused to budge an inch.  After returning to Washington, D. C. President Roosevelt was asked by some, including his wife Eleanor, why he had not attempted to save Poland from the Russians.  An exasperated and bone-tired FDR wondered if he should go to war with the Soviet Union, as that was likely the only way the Russians would relinquish the territory they had taken from the Germans.  Stalin intended to provide the Soviet Union with a cushion of satellite states along his country’s borders to protect it in the future.  Two months later, Franklin Roosevelt was dead and Harry Truman was President of the United States.  It would take forty-four years before Communism would fall in Poland.

One Congressional district in Michigan illustrates what an important constituency Polish-Americans were to Franklin Roosevelt’s Democratic Party, a voting bloc the President once estimated being as high as perhaps seven million voters.  Michigan’s First Congressional District, a slice of east Detroit in Wayne County, was largely populated by Polish immigrants when FDR defeated Herbert Hoover in 1932.  With the Democratic tidal wave, George G.  Sadowski came to Congress.  For almost three decades, three men dominated the politics of Michigan’s First Congressional District: Sadowski, Rudolph Tenerowicz, and Thaddeus Machrowicz.  All were Democrats, at least at one time or the other; Sadowski was a hearty New Deal Democrat, while Machrowicz was a Cold War Democrat.  Tenerowicz was actually a physician and surgeon who served in the First World War.  While Tenerowicz was perhaps the best glad-handling politician of the three, he served the least time in Congress.  Dr. Tenerowicz was an especially colorful figure with a shock of gray hair drooping across his face who was convicted of a vice violation, which sent him to Southern Michigan prison for eight months before Governor William Comstock gave him a full pardon.  To give one an idea of just how popular Rudolph Tenerowicz was in the Polish-American community, Comstock pardoned the doctor after receiving a petition demanding a pardon signed by 45,000 citizens.  Another demonstration of Tenerowicz’s personal popularity was the fact he missed winning a fifth term as mayor of Hamtramck, Michigan by a mere 18 votes.

George G. Sadowski first came to Congress in 1932 and won the general election against Republican Charles H. Mahoney with more than 68% of vote.  The Polish-American district represented by Congressman George G. Sadowski were hard working, largely working-class Democrats who pinned their hopes on the success of President Franklin D. Roosevelt and the New Deal.  The Polish-Americans in Michigan’s First Congressional District, like many people who were either immigrants or the children of immigrants, were passionately patriotic.  Only twenty-nine years old when first elected to Congress, Sadowski was a somewhat stout man with an abbreviated moustache and his hair swept up in a pompadour who had practiced law and won election to the Michigan State Senate.  Sadowski was evidently an enterprising person, dabbling in real estate and construction.  Eventually, George Sadowski become the owner of two golfing clubs.

As the congressman from the First Congressional District, George Sadowski never seemed to go without opposition, always encountering a challenge both in the Democratic primary and the general election.  Sadowski won renomination in 1934 easily, garnering almost 60% of the vote.  Once again, he beat his GOP opponent in the general election easily.  Sadowski ran for a third term as President Roosevelt sought reelection in 1936; an overwhelmingly Democratic year, Congressman Sadowski crushed his primary opponents by winning almost 70% of the ballots cast.  Sadowski was not worried about the general election in his staunchly Democratic district and campaigned on behalf of FDR in several districts largely populated by Polish-Americans.  Congressman Sadowski headlined a Democratic rally in South Bend, Indiana where he was introduced by his colleague Congressman Samuel Pettengill and toured the Polish parishes of the city after speaking in St. Adalbert’s Hall.

Sadowski had no electoral worries in the general election in 1936, winning more than 80% of the vote in his congressional district.  After having won three terms by increasingly larger majorities, one would have thought George G. Sadowski had entrenched himself in his district, yet he was defeated in the 1938 Democratic primary.  Sadowski’s opponent, Dr. Rudolph G. Tenerowicz, the mayor of Hamtramck, had been involved in a divorce proceeding that was a bit embarrassing, especially for the time.  Tenerowicz had sought to divorce his wife, who had accused her husband of being more than a little friendly with one Geraldine Fisher, a nurse who was the beneficiary of “presents of jewelry and money.”  According to Miss Fisher’s own statement, Dr. Tenerowicz represented “himself as an unmarried man.”  Although Tenerowicz asked Circuit Court Judge Homer Ferguson (who later represented Michigan in the U. S. Senate) to drop his divorce suit, Mrs. Tenerowicz’s attorney accused the doctor of having fled to Mexico to seek a quickie divorce south of the border.  Tenerowicz’s attorney bellowed his client had been “blackmailed in this case from the start.”  Mrs. Tenerowicz’s counsel insisted property had been assigned to three different women by the good doctor, causing the judge to wonder if they should not be identified for the time being as “A, B and C”.  Mrs. Tenerowicz’s lawyer snapped, “There are enough women in this case to go through the entire alphabet.”  It is all the more remarkable Congressman George Sadowski lost his primary to the rascally Mayor Tenerowicz.  The colorful mayor won the Democratic nomination by just over 2,200 votes.  Sadowski was bitter and contacted South Trimble, Clerk of the House, to inquire if there were any grounds for him to challenge the legitimacy of Tenerowicz’s nomination.  Trimble said he could see none.

Considering the closeness of the election, it is hardly surprising George Sadowski ran against Rudy Tenerowicz again in 1940.  Sadowski lost by an even greater margin, trailing Congressman Tenerowicz by more than 10,000 votes in the primary.  Tenerowicz won the general election with almost 80% of the vote.  It appeared George Sadowski’s political career was over, yet he entered the 1942 Democratic primary.  The former congressman campaigned hard and there may have been some hard feelings about Rudy Tenerowicz getting remarried and putting his new wife on his Congressional payroll.  Sadowski won with almost 44% of the vote while the incumbent garnered less than 30% of the ballots cast.  It was the end of Rudolph Tenerowicz’s electoral career, although the irrepressible Rudy would keep trying.  In fact, Tenerowicz filed to run in the Democratic primary in 1944 for another showdown with George Sadowski, but withdrew his candidacy before the filing deadline.  In 1946, Tenerowicz ran for Congress again – – – as a Republican.  Evidently most Republican voters at the time didn’t much relish the idea of a former Democratic congressman as their nominee and Tenerowicz lost the primary, polling just under 24%.  Persistent, Tenerowicz kept trying to get back into Congress, offering himself as the Republican nominee in 1948, 1950, 1952, and 1954.  Tenerowicz, despite being an able politician, had worn out his welcome with the voters and the First District was becoming, if anything, even more Democratic.  Rudolph Tenerowicz polled only 11.33% of the vote in his 1954 race for Congress.

After vanquishing his foe Rudy Tenerowicz, George Sadowski was reelected in 1944, 1946 and 1948.  In 1950, Thaddeus Machrowicz, a justice of the peace, challenged Congressman Sadowski inside the Democratic primary.  The vote was divided between seven contestants and Machrowicz eked out a victory by 162 votes.  Congressman Sadowski demanded a recount, which did not change the results.  Not quite fifty years old and a veteran of fourteen years in Congress, George G. Sadowski made his last political stand by running in the 1952 Democratic primary.  Sadowski was certainly well known inside the First District, especially as he had been a candidate for Congress in every election since 1932.  Sadowski was more moderate than Machrowicz, who was a fierce anti-Communist and had helped to expose the Soviet role in the Katyn Forest massacre of Polish officers and soldiers during World War II.  A new constituency was growing inside Michigan’s First District; African-American voters comprised roughly 40% of the electorate in the Congressional district and they were demanding representation.  State Senator Charles C. Diggs, Jr. was running against Congressman Machrowicz inside the Democratic primary along with former Congressman Sadowski and several others.  In fact, Dr. Ossian Sweet, William White and Charles Jones were also seeking the Democratic nomination for Congress and were African-Americans.  There was a political realignment going on inside the First Congressional District; previously most African-Americans had voted Republican.  In fact, Charles Diggs’s father had once been the GOP nominee for Congress in the district.  Charles Roxborough, one of the first blacks elected to the Michigan state legislature, had been the Republican nominee for Congress some years earlier.  Machrowicz had managed to entrench himself in office and beat Charles Diggs by more than 11,000 votes; former Congressman George Sadowski ran third, polling less than 20% of the vote.  It was George Sadowski’s last political campaign.  Sadowski concentrated on his business interests and developed a heart ailment in 1960 and died of a heart attack at his home in 1961.

George Sadowski’s wife, Eleanor, survived him by a number of years, dying in 2001 at age 95.  Mrs. Sadowski was a successful businesswoman in her own right and eventually spent only summers in Michigan and wintered in the Florida Keys where she kept a home.

The old rascal, Dr. Rudolph Tenerowicz died in 1963, largely forgotten even inside his own community.  Thaddeus Machrowicz served in Congress for a decade before being nominated to serve in the federal bench by President John F. Kennedy in 1961.  Machrowicz was confirmed by the Senate and served as a federal judge for another decade before dying in 1970.  Sadowski, Tenerowicz, and Machrowicz were all Democrats, all of Polish extraction, and patriots.