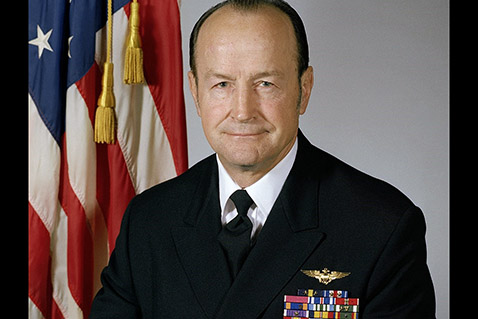 I noticed the other day Senator Bill Hagerty released a list of those he had nominated for the various military academies.  Most senators now keep a person on staff to review the application of those wanting to attend military academies and it is still an important responsibility.

It made me think of William P. Lawrence.  Lawrence was the son of Robert L. “Fatty” Lawrence of Nashville, who, despite his nickname, had been an athlete and football player at Vanderbilt University.  “Fatty” Lawrence was a rather well-known and well-liked figure in Nashville where he was the superintendent of the Water and Sewer Services Department of local government, a post he held from 1932 to 1971.  Lawrence’s son, received a coveted nomination to the Naval Academy in 1947 from Tennessee’s senior United States Senator, Kenneth D. McKellar.  Lawrence, like his father, was an athlete and had an offer of a scholarship to Yale University, which he turned down to attend the United States Naval Academy.  West End High School’s “Billy” Lawrence took the entrance examinations and was told by Navy Head Coach Tom Hamilton he had passed with “the exceptionally high mark of 3.6 out of a possible 4.0.”  Once young Lawrence had received a nomination to the Naval Academy, West Point became interested in him as well.  Billy Lawrence took the West Point exam, which he also passed easily.  Evidently, young Lawrence had his heart set on attending the Naval Academy, as he turned down West Point’s Colonel Earl “Red” Blaik to play football there.  Two of Lawrence’s brothers, Eddie and Bobby, had been star athletes at West End High School in Nashville as well.  In 1947, Bobby Lawrence was 21, while Eddie was 19.

There was a much younger Lawrence brother, three-year-old Tommy, who was caught up in the excitement generated by attending a basketball game to watch Billy play at West End High School.  Apparently, Tommy Lawrence was positively enthralled by what he saw as according to the Nashville Tennessean, the little boy later that night knelt beside his bed to say his prayers and began by saying, “God bless Mommy, God Bless Papa . . . and Rah, Rah, Rah for West High!”

When the Nashville Banner made the announcement William “Billy” Lawrence had been nominated to attend the United States Naval Academy, reporter Edgar Allen noted the youngster was a “football-basketball-baseball-tennis star” at West End High School for the three years he had attended.  Allen also wrote Billy Lawrence was “one of the most brilliant students the Interscholastic League has ever seen.”  Nashvillians were justly proud of Billy Lawrence’s nomination as Edgar Allen wrote, “It is believed that he (Lawrence) is the first outstanding local athlete ever to receive such an appointment.”  Lawrence’s appointment drew far less attention from Nashville’s other daily newspaper, the Tennessean, perhaps because of his sponsor.  Silliman Evans, publisher of the Tennessean and Senator McKellar were, to say the least, neither personal friends nor political allies.  Evans had backed the candidacy of Edward Ward “Ned” Carmack, son of the fiery editor and former senator who had been killed in Nashville, against McKellar in the 1946 Democratic primary.  The younger Carmack had quite nearly beaten McKellar’s junior colleague, Tom Stewart, in the 1942 election.  Despite the relentless barrage of publicity published by The Tennessean on behalf of Ned Carmack, as well as a constant battery of negative stories about McKellar, the seventy-seven-year-old senator was reelected easily without even once returning home to campaign.  Naturally, the defeat stung and it seems likely that while the wily McKellar could not have made an appointment to any military academy that would have been more pleasing to Nashvillians and Davidson County voters than that of Billy Lawrence, the Tennessean wasn’t much in the mood to give the old senator the credit for Lawrence’s nomination.

William P. Lawrence was not only a talented athlete and student but quite simply an exemplary person.  Lawrence graduated from the U. S. Naval Academy in 1951 with a degree in electrical engineering.  The following year, Lawrence became a Naval pilot and was deployed to Korea in 1953 on the aircraft carrier USS Oriskany.  Bill Lawrence also became part of Project Mercury, which was the first human spaceflight program launched by the National Aeronautics and Space Administration.

Bill Lawrence was a Commander of the Fighter Squadron 143, which was aboard the USS Constellation.  Lawrence was shot down over Vietnam during a mission and he and his radar intercept officer, Lieutenant James W. Bailey, were forced to eject from the plane.  Both men were taken prisoner by the North Vietnamese and were regularly subjected to beatings and torture by their captors.  Bill Lawrence became well-known for his refusal to bow down to his tormentors and resisted in every way possible.  When Admiral Lawrence died, Senator John McCain, a fellow prisoner-of-war, said, “He’s probably the greatest man I’ve ever known in my life.”  Many readers will be astonished to learn it is Admiral William Lawrence who penned Tennessee’s state poem, “Oh Tennessee, My Tennessee.”  It is both beautiful and inspiring and it is easy to see why the Tennessee General Assembly adopted it as our state poem:

What Love and Pride I Feel for Thee.

You Proud Ole State, the Volunteer,

Your Proud Traditions I Hold Dear.

I Revere Your Heroes

Who Bravely Fought our Country’s Foes.

Renowned Statesmen, so Wise and Strong,

Who Served our Country Well and Long.

I Thrill at Thought of Mountains Grand;

Powerful Rivers that Bring us Light;

Deep Lakes with Fish and Fowl in Flight;

Are the Hallmarks of Tennessee.

And O’er the World as I May Roam,

No Place Exceeds my Boyhood Home.

And Oh How Much I Long to See

My Native Land, My Tennessee.

Admiral William P. Lawrence wrote that poem in his own head and committed it to memory while being held as a prisoner of war by the North Vietnamese.  By 1981, the one-time boy from Nashville, Tennessee assumed command of the Third Fleet in Pearl Harbor, Hawaii.  Lawrence had previously served as the superintendent of the Naval Academy for several years.  Lawrence’s daughter Wendy attended the Naval Academy in 1981, the year after it began accepting female cadets.  Wendy Lawrence became an astronaut.    Bill Lawrence retired as a Vice Admiral and assumed the Chair of Naval Leadership at his beloved Naval Academy until 1994.  Lawrence passed away in 2005.

Obviously, a man of immense ability and dedication, Billy Lawrence had been given a rare opportunity by the crusty old veteran of politics, Senator Kenneth McKellar.  For my fellow old men out there, the youngster you mentor and bring along; for the youngster for whom you open doors and provide opportunities, you can only imagine the heights they may rise to long after we are gone.

I’ll also tell one other story before bringing this column to a close.

James Hamilton Lewis was one of the true eccentrics to occupy a place in the United States Senate.  Lewis was famous for his extravagant and flamboyant wardrobe, which almost always included wearing spats over his shoes.  Lewis sported a beard of a pinkish color and wore an elaborate toupee meant to fool no one.  J. Hamilton Lewis had something of a spotty congressional career, winning an at-large seat in Congress from the State of Washington from 1897  to 1899.  Lewis was elected to the United States Senate from Illinois, defeated and made a triumphant comeback in 1930.  In a February 4, 1933 letter to national columnist Mark Sullivan, Lewis recounted several incidents.  The letter was three and a half pages long, typed single-spaced.  Lewis sought to correct what he perceived to be errors in Sullivan’s writings about the senator’s lengthy career.  Lewis told one particularly interesting story, relating how he was speaking in Spokane to “the large multitude that comes under such circumstances.”  Senator Lewis noticed “from the back of the hall there came a man walking through the aisle clad more in mud than clothing.”

The mud-covered fellow had come sixteen miles and pointedly asked if Lewis would appoint his son to the Naval Academy should he be elected.  “I found he had come that distance to serve that boy,” Lewis wrote Sullivan.  “He was an Irish farmer with a little Irish farm that barely gave him existence of bread and meat,” Lewis told Sullivan.

“You have come this far to have your boy get this position?” Lewis asked the farmer.  Downhearted, the man’s eyes filled with tears and as Jim Ham told the story, he assured the fellow, “If I am elected, you are just the man who will get that place for that boy.”

Lewis wryly recalled, “To the surprise of things, I was elected.”  And of course then came the demands of “the bankers and the prominent citizens, the socially exclusive” for their own sons to be appointed to the Naval Academy.  Lewis kept his promise to the poor Irish farmer, much to the chagrin and horror of the better-off folks.  Lewis remembered those who had been disappointed waged a vicious campaign against him, but he did appoint the Irish farmer’s son to the Naval Academy.

Some years later, J. Hamilton Lewis was in London “as the parliamentary representative of the proposed treaty for the safety at sea after the Titanic disaster.”  Lewis received a cable from the United States government telling him a representative of the Navy was on his way from the Philippines who was “the most effective and the most competent nautical expert on construction the Navy felt it possessed.”  James Hamilton Lewis was asked to introduce the expert to Admiral Capps in London.  Several days later a card arrived informing Lewis that someone was waiting to see him and the future senator brought the officer into his rooms.  Lewis told the gentleman he would promptly present him to Admiral Capps.

Hamilton Lewis told Mark Sullivan he noticed an odd look that passed over the officer’s face. Lewis described it as a look of “quizzical humor and apparently a form of hidden anxiety.”  The officer finally said, “You don’t know me.”  Lewis was surprised and replied, “But it is enough that I have the authority to present you, and I will vouch for you.”  Lewis related to Sullivan the officer spoke to him in a tone of “something of a bitter Irish humor.”

“Well, Senator Lewis, I thank you for the compliment you transmit from the Government that I am the most expert nautical instructor the Government could send to compete with the experts of foreign lands, and while all of that is pleasant to me, the thing most pleasant to tell you is that I am John Walsh, the man whom you appointed to the Naval Academy who you had never seen.  I am the son of the Irish farmer who got down to Spokane for your meeting, whom you promised you would appoint his son.”

“Of course, you can understand what reunion followed from that,” Lewis informed Mark Sullivan.

Lewis wrote that John Walsh had lost his sight during the First World War but remained on the government payroll “as a retired expert, ranking with the most eminent authorities in the world marine and navy.”

Senator Lewis closed his letter to Mark Sullivan, “Now since you have this true bit of history, we will meet at the Club and exchange whatever they have in the way of draughts – not restricted to water.”

Sullivan replied to the letter from Senator Lewis and readily confessed he was confused.  The columnist could not remember having written anything within recent years that would require a retelling of several tales.  Whether or not they were tall tales, they were good enough to be repeated yet again, as all the best tales are.