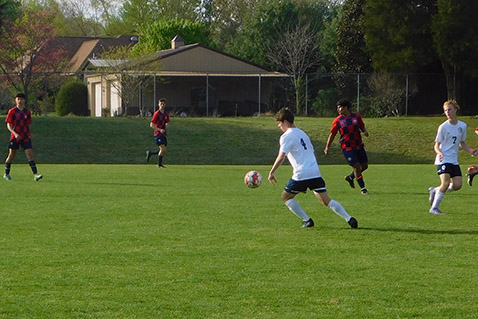 It seemed only fitting that a freshman goalkeeper would take center stage in a penalty kick shootout for the South-Doyle High School boys soccer team as the sun was setting Thursday night.

Jonah Mitchell, who made point-blank saves throughout a 1-1 draw for the Cherokees in their District 4-2A match at Halls, made three more stops in the shootout and helped South-Doyle defeat the Red Devils, 4-1, in the shootout.

While Mitchell was stifling Halls in the shootout, South-Doyle’s Thomas Riley, Brody Bean, Tate Straussfogel and Parker Williams scored in the shootout for the Cherokees, who shot first in the round of penalty kicks.

Halls tied the shootout, 1-1, when Patrick McWilliams beat Mitchell with a shot. But that was the last ball to find its way past the Cherokees’ freshman netminder.

In addition to his three saves in the shootout, Mitchell made 12 saves in 80 minutes of regulation play and 20 minutes of sudden death (golden goal overtime).

With the shootout victories, the Cherokees have put themselves in position to claim the second seed in the upcoming district tournament if they defeat Gibbs Thursday night.

Kickoff is slated for 6 p.m. in Corryton.

Defending Class A State Champion Austin-East, which defeated state powerhouse Farragut recently, has already claimed the district’s regular-season title and the Roadrunners will be the top seed in the tournament.

The Cherokees might have ultimately prevailed against the Red Devils, but Halls took an early lead when Jacob Eubanks tallied in the 16th minute.

South-Doyle answered on a marker by C.J. Kilgore just past the midway point of the first half to tie the game at 1-1.

Things got a bit chippy after halftime and Halls spent much of the first half a man down after the Red Devils were assessed a red card. Halls and the Cherokees also picked up yellow cards after the break.

Massie wasn’t pleased with his squad for the cautions.

“We talk about having a championship mentality and we talk about it all the time,” Massie said. “And that got away from us a little bit.

“But I thought we were able to do some good things in the overtimes.”

The Cherokees outshot Halls, 3-2, in the extra frames.