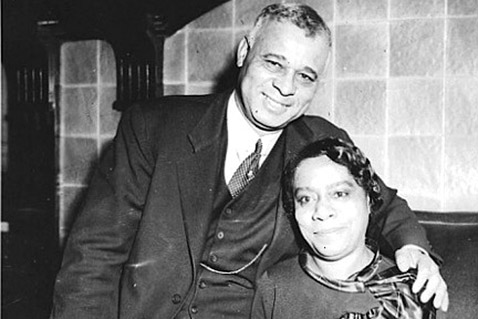 The folks who read this column regularly are some of God’s gentlepeople and highly discerning.  That is my opinion, yet I will be positively shocked if a single reader remembers Arthur Wergs Mitchell.  One of the most interesting aspects of history to me is the stories hidden inside other stories.  History is composed of the humble and the lowly as well as the high and mighty.  Arthur Mitchell was notable in several ways.  Mitchell was the first Black to be elected to Congress as a Democrat.  Recently I asked several folks what year that might have happened; only my friend Travis Brasfield came close to being right, but then Travis (not to be confused with his Dad, Travis the elder who is also a friend of mine) is a mighty bright young man and an able lawyer.  Travis the younger guessed 1932 and the correct answer was 1934.  Every Black lawmaker who had served in Congress prior to that time had been a Republican.  In fact, Arthur W. Mitchell beat an incumbent Black Republican to go to Washington, D. C.  Mitchell beat Congressman Oscar DePriest in the 1934 election and stayed in the House for the next eight years.  Oscar DePriest was a power inside the City of Chicago and is worthy of a column in his own right; he was highly popular inside his district and was something of a character.  And for young and old attorneys alike, Arthur Mitchell is more than a footnote in one of the most significant desegregation decisions issued by the U. S. Supreme Court.

Arthur Mitchell came to Congress as the coalition that had elected Franklin D. Roosevelt to the White House had changed some traditional voting patterns.  Increasingly over the next decade, Blacks would move away from the party of Abraham Lincoln to the party of Franklin Delano Roosevelt.  Unlike Oscar DePriest, who was a businessman and landlord, Arthur W. Mitchell was a staid and somewhat dour attorney.  Mitchell too had been a Republican until the advent of the New Deal.  DePriest had faced white Democrats in general elections until facing Mitchell.  Fate had intervened to send Mitchell to Congress.  Arthur Mitchell had lost the Democratic primary to Harry Baker.  Unfortunately for Mr. Baker, he died before the general election and Mitchell was named as the replacement candidate.

All of that occurred well after a hardscrabble childhood and a determined effort to educate himself.  Arthur Mitchell put himself through school as a farm laborer and was later an assistant to the famed educator Booker T. Washington.  As did so many of his generation, Mitchell taught school to save money to put himself through college.  Arthur Mitchell attended Columbia and Harvard universities before being admitted to the Bar in Washington, D. C. in 1927.  Mitchell moved to Chicago in 1929 and practiced law and (like Oscar DePriest) dabbled in the real estate business.  Mitchell’s first wife, Eula Mae King, died in 1910; they had one son who was named after his father.  Arthur Mitchell later married Annie Harris and they were together until her death in 1947.

Mitchell’s political ascent was swift; following the passing of the late Harry Baker, the burgeoning political machine of Mayor Edward J. Kelly slated Mitchell to run for Congress against Oscar DePriest.  Kelly had come to office after the murder of Anton Cermak, who had been shot by an assassin who was trying to kill president-elect Roosevelt while FDR was in Miami.  Cermak had driven out of office the last Republican to serve as mayor of Chicago: William Hale Thompson.  Thompson was little more than a buffoon and he presided over a pillar of corruption difficult to imagine.  Mayor Thompson had made fun of Cermak’s ethnic heritage, to which Cermak replied, “He doesn’t like my name. . .it’s true I didn’t come over on the Mayflower, but I came over as soon as I could.”

Cermak died from the gunshot wound he suffered while speaking to Roosevelt and Edward Joseph Kelly was personally picked by Patrick Nash, the Chairman of the Cook County Democratic Party.  Together, the two men would run the Kelly–Nash machine which prospered and lived on long after its progenitors had gone on to their reward.  True, others took hold of it and made it their own, most notably, Richard J. Daley.

It is entirely possible neither Mayor Kelly nor Pat Nash thought Arthur Mitchell would beat Congressman Oscar DePriest but win he did with 53% of the vote.  DePriest came back to challenge Mitchell again in 1936 and easily beat his opponents inside the GOP primary.  Yet Mitchell, a strong supporter of President Roosevelt and the New Deal, increased his margin in a year that was an excellent one for FDR in particular and Democrats in general.  After first being elected to Congress, Mitchell had said, “What I am interested in is to help this grand President of ours feed the hungry and clothe the naked and provide work for the idle of every race and creed.”

Mitchell’s job of beating Oscar DePriest in 1934 had been immeasurably aided by Mayor Edward J. Kelly who, contrary to past Democratic mayors, had ardently courted the Black community and its votes.  Arthur Mitchell also made Oscar DePriest defend the record of former GOP president Herbert Hoover.  When Mitchell first went to Congress in 1935, he was assigned to the House Post Office Committee, a lesser assignment like most freshmen receive, yet it gave him a voice in naming all the postal employees inside Illinois’ First Congressional District.

As might be expected, Arthur W. Mitchell was a loyal supporter of President Roosevelt and the New Deal.  Mitchell was not a member of the delegation from Illinois to the Democratic National Convention in 1936, but a request came from Senator Joseph F. Guffey of Pennsylvania that Congressman Mitchell make one of the speeches seconding President Roosevelt’s nomination.  The Chicago Tribune duly noted the surprise of Democratic governor Henry Horner along with other members of the delegation, but if FDR wanted Arthur Mitchell to second his nomination the President would get his wish.  Officially, Arthur Mitchell merely spoke before the Democratic National Convention on the state of the union, yet the congressman made what was to be his speech seconding the nomination of President Roosevelt.  In his speech, Mitchell pledged the votes of “3,000,000 Negro” voters in the coming election to FDR and the Democratic Party.

Mitchell was re-elected to Congress in 1938 by turning back a bid by Republican William L. Dawson who ran a strong campaign.  Dawson was also Black and would later succeed Mitchell as a Democrat.  William L. Dawson built a formidable political machine of his own inside the district which was also a part of the Kelly – Nash and Daley machines.  Congressman Mitchell continuously used his office to fight discrimination and was a vocal critic of the treatment of black soldiers during the Second World War.

In 1937, Arthur W. Mitchell bought a first-class ticket from the Illinois Central Railroad Company in Chicago.  Congressman Mitchell intended to travel from Chicago to Hot Springs, Arkansas for a two week vacation.  A first class ticket was three cents per mile and the congressman traveled from Chicago to Memphis where he transferred to the Chicago Rock Island and Pacific Railroad.  Mitchell had requested a Pullman sleeper coach, which was an additional ninety cents.  When the train crossed the Mississippi River into Arkansas, the conductor began collecting fares.  Albert W. Jones was somewhat dismayed to find a Black gentleman sitting in the “white” section and promptly ordered the congressman to the car reserved for Blacks.  Arkansas had a Separate Coach Law, which had been passed in 1891, covering the 2,063 miles of railroad tracks in the state.  The law was meant to establish “equal but separate and sufficient” railroad car accommodations for white and black passengers; the law also required railroad employees to enforce the law or otherwise be fined $25 to $50, a significant sum for the time.  The proposed fines for those passengers who refused to obey the instructions given them by railroad employees trying to enforce the law were even higher, ranging from a low of $10 to a high of $200.

Congressman Arthur Mitchell refused to obey conductor Albert W. Jones.  Finally, facing the possibility of the train being stopped and the nearest sheriff being summoned to arrest him, the congressman moved back to the car reserved for black passengers, which also had sections for both black and white smokers.  Once arriving in Hot Springs, Mitchell was greeted by the governor and the mayor of Little Rock and the congressman said nothing about his appalling treatment while traveling in Arkansas.  Nor did Arthur W. Mitchell utter a single word about the incident while vacationing in Hot Springs.  Upon his return to Chicago, the congressman promptly filed suit and described the condition of the railroad car he had been forced to travel in as “poorly ventilated, filled with stench and odors emitting from the toilet and other filth, which is indescribable.”  As for the conductor, the congressman’s legal brief stated the behavior of Jones was “too opprobrious and profane, vulgar and filthy to be spread upon the records of this court.”  The Interstate Commerce Commission dismissed Congressman Mitchell’s complaint, but he persisted, appealing the ruling to the United States District Court for the Northern District of Illinois.  That court dismissed Mitchell’s complaint as well, but the congressman was determined and appealed the ruling directly to the Supreme Court of the United States.

It took just over four years from Arthur Mitchell’s humiliation to the ruling of the high court.  The unanimous opinion of the Supreme Court was delivered by Chief Justice Charles Evans Hughes.  The Supreme Court reversed the decision of the U. S. District Court and remanded the case; the Supreme Court also directed the ICC order be set aside.

Arthur W. Mitchell displayed a steely determination to pursue his goal irrespective of the consequences and there was certainly political fallout.  Mayor Ed Kelly had become uneasy about the suit against an Illinois railroad and it is unknown if the congressman was pressured by the machine.  Mitchell won and settled for an undisclosed sum out of court.  Mitchell also received  $3,750 and court costs.  Yet he announced he would not seek another term in the House of Representatives in 1942.  It seems almost certain the Kelly–Nash machine made it quite clear he would be denied the Democratic nomination if he insisted upon running for a fifth term.  Arthur Mitchell never lost his quiet dignity and retired to a beautiful estate in Petersburg, Virginia.  Mitchell evidently had some business interests and real estate in Washington, D. C. and remained somewhat active in politics.  The former congressman was a supporter of Adlai Stevenson in the 1952 election.  Arthur W. Mitchell comfortably assumed the role of elder statesman and gentleman farmer.

Mitchell’s second wife, Annie Harris Mitchell died in 1947 and a year later the former congressman married Clara Smith Mann and they remained together until Mitchell’s death.  Evidently, the ex-congressman outlived his son but by the time he died at age eighty-five in 1968, he had a granddaughter and several stepchildren still living.  Arthur W. Mitchell died peacefully at his beloved Rose-Anna Gardens estate.

Mitchell’s estate in Petersburg, Virginia Rose-Anna Gardens, was also known as “The Land of a Thousand Roses.”  Mitchell’s estate was opened to the public each year with hundreds of people visiting the spacious and magnificent gardens for free.  As was often the case at the time, Mitchell’s body lay in repose at his home before being moved for burial.  Yet the former congressman had stood for something and once determined to accomplish a task, let nothing deter him.