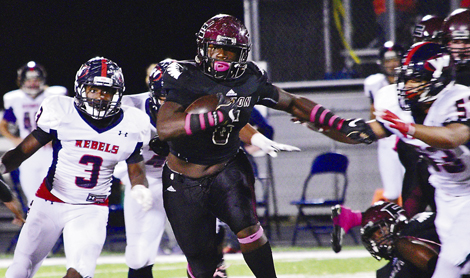 It might have been his last game on Bob Black Field and he left Fulton High fans something to remember him by on offense and defense.

Chaton Mobley, nicknamed “Mobbatron,” scored on both sides of the ball Friday to lead the Falcons to a convincing 44-3 win over West on Senior Night.

The 6-2, 237-pound running back displayed his determination on a 46-yard catch and run that gave Fulton a 6-3 lead late in the first quarter.

“The beast came out of me,” said Mobley, recalling Xavier Malone’s pass to him in the flat. “I just took the rock and took it for six.”

At least two West defenders were in position to stop him.

“I made the first guy miss,” he said. “I broke the second tackle and slipped off the guy to get in the end zone.”

With Fulton leading 24-3 at the start of the second half, the Rebels had moved into scoring range with hopes of getting back in the game. But Mobley the linebacker put an end to such thoughts when he snatched the ball from West running back K.J. Jefferson and returned it 85 yards for his second TD.

“I seen a chance to rip the ball and I ripped it,” said Mobley, who has committed to Middle Tennessee State University as a middle linebacker. “There was nothing but green grass in front of me.”

The win was Fulton’s fourth in a row since being 2-3. The Falcons lost to three tough opponents – Maryville, Austin-East and Catholic – in the first half of the season.

“We’re focused,” said Mobley, who had 245 all-purpose yards. “We’re going to try and win a gold ball this year. We’re not going to settle for less. We’ve got to have wins like we had tonight.”

Fulton (6-3 and 3-1 in Region 2-4A) will go to Central in a regular season finale Friday to play for second place in the region and a first-round home game in the playoffs. The Bobcats (7-2, 3-1) are riding a six-game win streak.

“Chaton is a great leader,” said Black. “He gets it done every day in practice. He plays like he practices and that’s 100 miles per hour.

“As for his physical play on the field tonight, it seemed like every time we needed a play on offense or defense, he was right in the middle of the action. We depend on him.

“I hate to talk about him even being a senior, because we’re sure going to miss him.”

Mobbatron gained 26 yards on a Utah pass and 23 yards on a pitch left, getting a key block by fellow senior Zack Dobson, to set up Fulton’s second touchdown.

That would be a 14-yard catch by sophomore DaShaun McKinney, who also played big in the victory with two touchdown receptions and an interception.

McKinney’s pick at midfield came with 3:43 on the second quarter clock. He stayed on the field and caught passes of 16 and 15 yards before Dorian Williamson reached pay dirt from eight yards out to make it 18-3.

McKinney also pulled in a 14-yard TD pass over the middle from Malone with 13.3 seconds left in the first half. That score followed a blocked punt by linebacker DeShaun Page and a 14-yard catch by Dobson.

“The seniors were pushing everybody to get the win,” said McKinney. “They got everyone on board with them. It made us want to keep fighting for them in their Senior Night game.”

Smith’s tackle turned out to be key in keeping the Rebels out of the end zone as JaShaun Fenderson intercepted a pass and returned it 93 yards for a touchdown on the last play of the quarter.

Fenderson also caught a 42-yard pass with 5:25 remaining that put the ball on the West 2. Page powered in from the 1for the final TD.

Malone, who finished with 262 yards through the air, passed to Smith for a two-point conversion that finally ended a string of six failed PAT attempts. That would be the Falcons’ only flaw on this Senior Night.

The Rebels, losing their fourth straight game and dropping to 4-5, can still make the playoffs with a win over Region 2-5A champion Gibbs this week or a Heritage win at Halls.

“This season has not been what we wanted,” said second-year West Coach Jeff Harig. “There’s a host of reasons for that. But all the things that we wanted to do are right in front of us. We’ve got to put a complete effort together and get a win.”