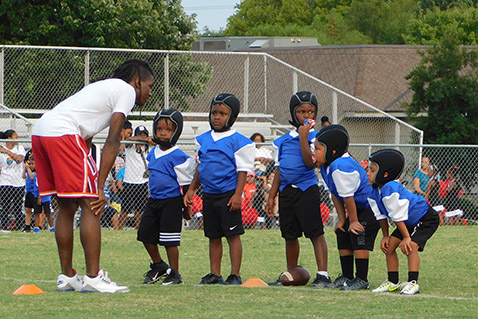 A major change has been made in local youth football this season.

The new Youth Athletic Conference (YAC) has been organized for 7U through 10U age groups and will include the following 12 programs: Bearden, Carter, Central, Farragut, Gibbs, Halls, Hardin Valley, Karns, Oak Ridge, Powell, South-Doyle and West.

Games in YAC, which also has flag teams for ages 6 and 7, will be played on Saturdays and at high school fields.

The impact of the new youth conference has left the longtime Knox Metro Youth Football League (KMYFL) at John Tarleton Park with less than half the number of teams it had last year. Tarleton Park, which is located off Sutherland Avenue next to the Young-Williams Animal Center, has six fields.

According to Knox Metro’s season schedule, which began Aug. 16, the KMYFL has a total of 30 teams and combined the 8U/9U and 10U/11U age groups.

Knox Metro has nine 6U flag teams, six 7U teams, six 8U/9U teams, five 10U/11U teams and four 12U teams. Most of the teams remaining in the KMYFL are inside the city, including the Falcons and Roadrunners, two programs that have had many championship teams over the years.

“Last year we started with 79 teams, but a few dropped out mid-season,” said Aaron Browning, Deputy Director for City of Knoxville Parks and Recreation.

“We’ve had a lot of changes as many commissions left our league and joined another league in the Knoxville area,” added Nathan Nease, Athletics Coordinator for Knoxville Parks and Rec.

“In the past, we normally had between 100 to 110 teams. It will look a lot different this year!

“Most of the county programs chose to join the YAC, which is the same group that is running the MAC.”

MAC is the Middle School age football league that started three years ago under the direction of Nathan Meeks.

Meeks is now excited about the new YAC league.

“I think with the success that we’ve had at the middle school level with the MAC over the last three years, some of the youth teams saw the growth, approached us and asked, ‘Hey, would you be able to put something together for the youth age groups.’”

In the YAC and MAC leagues, “everything is centered around the communities,” said Meeks, “so even now at the youth level, they are going to be playing games at the high school. They will be able to have concessions and play on the same field that the high school kids play on.

“And instead of driving across town to Schumpert Park or Tarleton Park on a Monday or Tuesday night and trying to get home from school when you’ve got an 8 o’clock game, now we’ve moved all the games to Saturdays in the communities.

“It’s easier for parents, classmates and friends to attend the games. The games are on Saturday mornings, so now you’re not worried about an 8-year-old getting home at 9 o’clock at night after a game and having to go to school the next day.”

Meeks also feels some of the small rule changes, like using a regulation clock as opposed to a running clock, should improve the experience for the kids.

Both MAC and YAC are completely independent of Knox County and Knox Metro, said Meeks. “We are responsible for paying for field rental, security, medical, officials, janitors and insurance,” he said.

The MAC is in its fourth season this year. The programs in MAC include the same as those in YAC, except it does not have Oak Ridge, but has Alcoa and Fulton. Alcoa, in fact, won the MAC championship the past two seasons. Bearden captured the first MAC title in 2019.