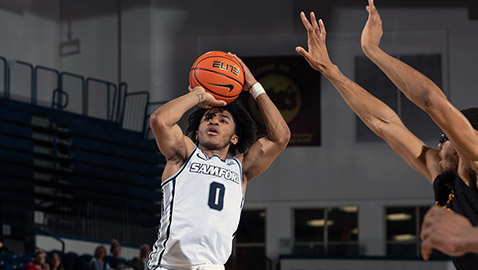 All he needed was a chance.

Former Bearden High basketball standout Ques Glover has been an exciting addition to the Southern Conference at Samford University this season after transferring from Florida.

He became a Bulldog again too and is playing the point guard position much like he did in leading Bearden to its first TSSAA state championship in 2019.

He’s so lightning quick and entertaining, you should check out his highlights on Twitter.

Florida Coach Mike White may wish he still had him. Current Gator point guard Tyree Appleby, a 6-1 senior, was averaging 10.1 points, 2.2 rebounds, 3.8 assists and making 35.3 percent of his field goal attempts as of Feb. 14.

Glover’s numbers were much better and the 6-foot, 180-pound sophomore has two more seasons remaining. He was averaging 18.6 points (fourth best in the SoCon), 2.7 rebounds, 4.2 assists (second best in SoCon) and had a FG shooting percentage of 47.6 percent. Despite a recent dip at the FT line, he was still sinking 82.4 percent of his free throws.

After earning MVP honors in Bearden’s state tourney run, which included an 83-68 title win over Memphis East, Glover suddenly became a recruiting target of Florida’s. A member of its coaching staff came to Knoxville two weeks later to watch him work out and Glover committed to sign with the Gators.

In hindsight, Florida had invested little time in recruiting Ques, which could explain why he got limited playing time in his two seasons in Gainesville. As a freshman, he averaged 4.4 points over 12.4 minutes per game and then dropped to 2.5 points over 8.5 minutes as a sophomore.

Incidentally, one of his best games at Florida came in his second year when he scored 10 points (4 for 7 FGs) in 15 minutes of action as the Gators beat the visiting Tennessee Vols 75-49.

Family members back in Knoxville say Ques and Coach White didn’t see eye to eye on his playing time and that was the main reason he left Florida.

He landed in Birmingham, which is a much closer distance to his hometown, and his new head coach, Bucky McMillan, plays an exciting offensive brand of ball that really suits Glover’s game.

“I really like the bond I have with my teammates and the chemistry that I’m developing with the coaches and everyone around the program,” Glover told The Focus recently.

“Some of my goals here at Samford are to help the team win the conference and make it to the NCAA tournament and to continue to grow as a player each day.”

Ques and Samford got off to quite a start. Playing in the Emerald Coast Classic in November, Glover was named to the all-tournament team as the Bulldogs won all three of the games in their bracket, including a 78-77 victory at Oregon State, which made it to the NCAA Elite Eight last year.

Glover’s outstanding play continued. He was named the Lou Henson National Player of the Week after scoring 21 points, collecting five rebounds and shooting 50 percent from the field in a 75-73 win at Ole Miss on Dec. 21.

In other highlights, Glover scored 20 points in Samford’s 80-72 victory over conference frontrunner Chattanooga and a season-high 30 points in a 107-93 loss at The Citadel.

More recently, Samford played at East Tennessee State on Feb. 12 and Ques played a key role in a 77-73 win. He hit a clutch pull-up jumper and raced for a layup in the closing seconds, finishing with a team-high 23 points.

In another clutch performance on Feb. 16, Ques hit a fade away jumper with one second left in OT to give Samford a 100-99 home win over VMI. He totaled 26 points and 10 assists as the Bulldogs improved to 17-9 overall and 7-7 in the conference.

Glover, who is an honor student and majoring in Sports Administration, will be back in East Tennessee this Saturday (Feb. 26) when Samford plays at Chattanooga at 4 p.m.

That game will give Ques’ friends from Knoxville another short trip to see him play. And as he’s already proven this season, he definitely can be fun to watch.

He just needed a chance.