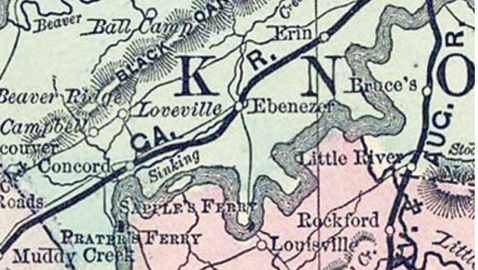 You know Lovell Road don’t you? That busy stretch of road between Kingston Pike and Hardin Valley Road seems to get busier each week with the growth in West Knoxville. But I bet you don’t know how it was named or the history behind that area.

Back in the early days of the settlement of our area, the land around Kingston Pike and Lovell Road was the property of Robertus, or Robert, Love. The settler built a home and a fulling mill to treat cloth and a community developed around his home. It became known as Loveville which, over time, was corrupted to “Lovell.”

Place names change often as time passes. Many places in our area have names today that were altered or changed over time. Coal Town became Lake City and now is Rocky Top. Campbell’s Station is now the town of Farragut. Caryville was originally Wheeler’s Station.

Robert Love was a Revolutionary Soldier, born in Virginia, who moved to Grassy Valley west of Fort James White prior to 1792. He was a friend of the Knoxville founder and a supporter of the state of Franklin. Although a supporter he took a commission with the state of North Carolina and led forces against his friends who supported a new state.

Love was a friend of John Sevier although they were opponents in the brief Franklin rebellion. When Sevier surrendered to North Carolina militia he did so to Love, who protected him from death and, following the failed Franklin effort, continued his friendship with the Territorial and State Governor.

Robert Love had a long military career, starting as a wagoner against the Cherokee in Tennessee, a sergeant in Virginia, a Lieutenant under General Nathaniel Green, a Colonel in the North Carolina force and a Colonel in command of the Washington County, N.C. (East Tennessee) forces against the Chickamauga Cherokee.

Love was only 23 years old when he moved to the Knoxville area. He had married Mary Ann Dillard, daughter of a Virginia militia colonel. Love served as a representative to the formation of the proposed state of Franklin, and was also an associate of Andrew Jackson, who wrote a letter in support of Love’s claim of service during the Revolution.

Love, who may also have been a minister, died in 1845 and is buried in Waynesville, N. C.

A state historic marker, which sat along Kingston Pike near the site of Loveville, noted his service but is now missing.