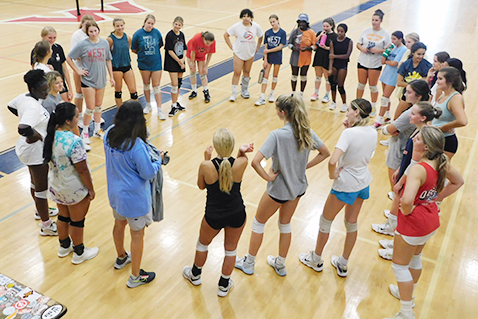 Mike Mullins’ retirement was a short one.

The personable and hard-working Mullins is back at it as Hardin Valley Academy’s new athletic director. He had been the AD at Oak Ridge High School for 15 years until announcing his retirement on Dec. 3.

Mullins graduated from Lincoln Memorial University in 1986 and started his teaching and coaching career at Powell Valley High, his alma mater. He joined the Oak Ridge football coaching staff in 1989. He has been involved in high school athletics for 35 years.

With the departure of Brown, Chris Kane is the new boys’ track and field head coach at HVA, while Andy Hibbitt and Kane have been named co-head coaches for the girls’ team, according to the TSSAA Directory.

“With the new Superintendent in place, Dr. Jon Rysewyk wanted to add another Athletics Specialist to assist Mr. Quinn since Athletics is growing in numbers daily,” said Tracy Miller-Davis, Administrative Assistant in the KCS Athletics Department.

The position was posted and there were several that applied, according to Miller-Davis. Brown began in his new position last week.

“The two of them will continue to work together,” added Miller-Davis. “Mr. Quinn will still keep the hours of 8am-12pm and Mr. Brown will work from 8am-4:30pm. That way if anything comes up in the evenings, he will be able to answer those concerns.”

In addition to being the AD at Hardin Valley in recent years, Brown had coached boys’ and girls’ cross country and track and field since the school opened in 2008. His programs dominated the KIL and consistently ranked among the best in the state.

Christian Academy of Knoxville boys and Halls girls swept the team championships in the annual 5 Star Preps Masters tournament to wrap up the opening week of the high school golf season.

In the two-day event (July 29-30) at Three Ridges, freshman Blake Russell led CAK to victory as he was runner-up in the individual competition behind medalist Aidan Collier of North Greene. Bearden junior Jaden Morrell placed third.

Lauren Davis and Bailey McGaha combined to propel the Lady Red Devils to the top of the team leaderboard.

Parker Miller of Maryville was the girls’ individual winner. Bearden’s Maya Hira came in second place and Davis was third.

A native of Olive Branch, Miss., Walls was head coach at St. Benedict, a Division II Class AAA school near Memphis, for two seasons (2019 and 2020). One of his players at St. Benedict was 5-Star defensive lineman Walter Nolen, who played his senior season at Powell last year and signed with Texas A&M.

After his best basketball season in five years at Farragut, Jon Higgins is taking on a new coaching challenge at Science Hill High School in Johnson City. He announced his career move last week.

Science Hill has one of the top boys programs in the state.

Higgins was voted The Knoxville Focus / Coaches’ 2021-22 Knox County Coach of the Year, which was based on regular season play.

His Admirals went into the Region 2-4A tournament with a 23-7 record, but a scuffle broke out in a game against William Blount, which resulted in players on both teams being suspended by the TSSAA. As a result, Farragut, without many of its starters, finished second in the region and was eliminated in the sectionals.

Higgins was hired at Farragut in April of 2017. Prior to that, the former UT standout was head coach at Central for five seasons. He also was an assistant under Jody Wright at Fulton for three seasons before taking his first head job at CHS.