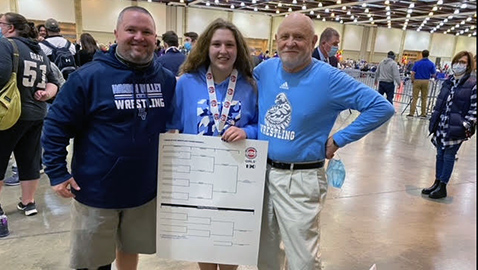 Ella Murphey has set some big goals as a wrestler at Hardin Valley Academy, and so far so good for the freshman.

“She seeks to do what Kenya Sloan did several years ago,” said Marc Giles, HVA’s wrestling coach, last week.

That was winning four straight TSSAA state titles and go 87-0.

“It’s a lot of pressure, but Ella’s mindset is what makes the difference,” said Giles. “She is always carefree, so she does not let any moment become too big for her. She is also probably the most aggressive female wrestler I have coached.”

Murphey capped her freshman season at Hardin Valley by winning the TSSAA Girls’ 190-pound weight class recently in the state wrestling tournament at the Chattanooga Convention Center. She recorded three straight pins en route to the title and finished with a 15-0 record.

“Kenya Sloan was special and a technical wizard,” recalled Coach Giles. “Ella is more like my wrestling style, which I call a brute style, meaning she does what she does well and no one can stop it even though they know it’s coming.”

Ella’s brother Marshall Murphey was a three-time state qualifier and has been wrestling with her since she was a kid, said Giles.

“She has also been in the HVA program since the seventh grade and has been wrestling mostly boys, so naturally she’s stronger than almost all of the girls she has wrestled.

“Another cool thing about the comparison between her and Kenya is they are both sweethearts off the mat.

“Ella has a bright future and a chance to do great things. She has accomplished her first goal of winning the state title in her freshman year.”

In Sloan’s high school career, she won her four titles in 2015 through 2018. The first three were in the 165-pound class and the fourth one was in the 160-pound class. She also was named the TSSAA’s Best Wrestler in 2018.

Sloan was ranked as the eighth-highest female wrestler in the nation in 2018.

In her freshman season (2018-19) at Campbellsville, Kenya placed sixth overall at the NAIA National Championships and posted a season record of 23-14.

As a sophomore, she had an 8-1 Duals Record, a 3-0 Open Record and went 3-1 in the postseason, with seven wins by technical fall.