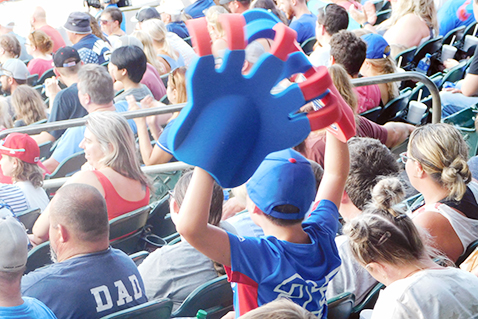 The colors were Red, White and Blue and the action was baseball and fireworks for the Tennessee Smokies’ Independence Day Extravaganza July 3.

A turnout of 6,769 fans was on hand at Smokies Stadium in Kodak for the Sunday evening Southern League game that got underway at 6:30.

The Smokies, a Class AA affiliate of the Chicago Cubs, lost 4-2, but they certainly had their chances against the Rocket City Trash Pandas, a Los Angeles Angeles’ minor league team.

Third baseman Jake Slaughter was a bright spot for the home club with a 3-for-4 performance at the plate that included a run scored and one RBI.

Tennessee twice had the bases loaded but couldn’t connect with a clutch hit.

The Smokies return home Tuesday night for a six-day homestand against the Biloxi Shuckers.

Thursday and Friday will be Fireworks Nights and it will be Grateful Dead Night on Saturday. Smokies baseball T-shirts will be given away free to the first 1,000 fans to cap off the week on Sunday.