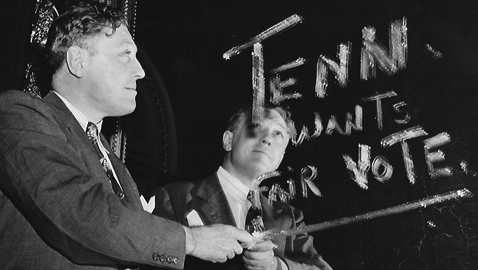 Edward Ward Carmack, Jr. possessed a name made famous by his father.  E. W. Carmack had been a congressman, United States senator and only just barely missed having been elected governor; the elder Carmack had also been a newspaper editor who deftly used his pen to praise his friends and torture his enemies in print.  It was that same talent that brought about E. W. Carmack’s death on the streets of Nashville.  Carmack, then editor of the Nashville Tennessean, had encountered Colonel Duncan Cooper and Cooper’s son Robin.  Carmack had been subjecting his former friend and employer Duncan Cooper to withering scorn and ridicule in the editorial pages of the Tennessean.  Colonel Cooper had sent a message to the editor to stop the abuse, a message that Carmack ignored.  Both parties were armed and Carmack drew a pistol and shots were exchanged, leaving Robin Cooper wounded and Edward Carmack dead.

The killing of Edward Ward Carmack was hotly debated subject by tens of thousands of Tennesseans.  There were those who saw Carmack’s death as an outrageous murder, while others contended the editor had fired the first shot and Robin Cooper was acting in self-defense.  The dispute almost destroyed Tennessee’s Democratic Party for a period of years, yet it left Cobey Carmack a widow and ten-year old Edward “Ned” Carmack, Jr. fatherless.

Despite having lived in Nashville for sometime, the Carmacks made their home in Columbia, Tennessee.  Elizabeth Cobey Dunnington Carmack had borne her only child somewhat late in life and took her son back to Columbia.  Mrs. Carmack and her sister Lucille Dunnington, evidently derived some income from the Dunnington estate.  Lucille never married and the two sisters would remain very close until Lucille’s death.  Cobey was appointed Postmistress of the Columbia post office, an appointment that had to be made by President Woodrow Wilson and confirmed by the United States Senate.  The appointment was a recognition of both Senator Carmack and his widow.  The appointment provided Cobey with additional income, allowing her to help pay for the education of her son, Ned.  By 1923, the Wilson administration had faded into history and had been replaced by that of Warren G. Harding, a Republican.  With the change of administrations, Congressman J. Will Taylor, the Republican patronage boss in Tennessee, was looking to replace Mrs. Carmack with a deserving member of the GOP.  Tennessee’s junior senator, Kenneth D. McKellar, sought to fight replacing Cobey Carmack with a Republican, but he was only able to delay the inevitable.  Senator McKellar put up such a fight that reporters questioned whether or not his relations with Congressman Taylor had been ruptured.  McKellar was quick to reply he and Taylor were still friends, but candidly admitted he did not at all like how Mrs. Carmack had been treated by the Republican boss.

At the time of his mother’s ouster as postmistress of Columbia, Ned Carmack was a twenty-two year old law student.  Young Carmack eventually earned his law degree, but would have a difficult time finding a place for himself in life.  At various times in his life, Ned Carmack would be a lawyer, newspaper owner and publisher, candidate for public office, and real estate developer.  Unfortunately, Ned Carmack did not make a real success of any of his occupations, causing Shelby County political boss E. H. Crump to bluntly crow Carmack had been a failure at everything he had tried to do in life during one political campaign.  Ned Carmack was very well aware he possessed one of the more famous names in Tennessee politics and aspired to follow in his father’s footsteps.

Robin Cooper, who had fired the fatal shots that had killed E. W. Carmack, died under mysterious circumstances when Ned Carmack was around twenty years old.  Cooper left an unknown guest in his automobile and was found dead, his skull crushed from having been beaten with a rock, in or near a creek.  The bloody rock was found in Robin Cooper’s automobile, which had been left running until it ran out of gas.  The same night Robin Cooper was killed, Ned Carmack was spending the night with a college friend, yet for the remainder of his life, he would privately claim the credit for having killed Robin Cooper.  His political campaigns past, Ned Carmack was especially quick to claim that he had murdered his father’s killer.  Eventually, Carmack’s delusion would grow, as Ned Carmack told at least one friend, Houston Williams, that he had killed Colonel Duncan Cooper by smothering him with his own pillow.  The truth is, Colonel Cooper died in bed surrounded by his family.  Andrew Ewing, the college friend with whom Ned Carmack had spent the night Robin Cooper was murdered, was interviewed by a writer for the Nashville Tennessean some years after Carmack had died.  Andrew Ewing admitted he was then eighty-one years old and while the events being discussed had occurred sixty-two years earlier, he was certain he remembered most of the details.  “Ned Carmack was a brilliant young man with a literary bent, vigorous and fiery in his manner,” Ewing recalled.  “He was very like young Joe Byrnes [sic], who also wanted to emulate his famous father.”  Ewing remembered that Carmack had been out on a date before arriving at his boarding house.  Ewing also recalled he had been interviewed twice by the police as to the whereabouts of Ned Carmack of the night of Robin Cooper’s murder.  The police quickly concluded Ned Carmack was not Robin Cooper’s killer.

Ned Carmack didn’t much care for the legal profession and tried real estate speculation, but that profession did not bring success and Carmack settled in Murfreesboro, Tennessee.  Carmack accepted a job as the editor of the Murfreesboro Daily News Journal and it was no coincidence that he was engaged in the same profession that had first made his father famous.  In his capacity as editor for the Daily News Journal, Ned Carmack exhibited some of the flair of his famous father, albeit not enough to get himself killed.  In 1933, Carmack bought the newspaper from Andrew L. Todd, a wealthy businessman and politician who had lost a race for the United States Senate to Cordell Hull in 1930.  It was not long before the newspaper began to fail.

Eventually control of the newspaper returned to the Todd family and Carmack’s sights were set on making a career for himself in the political arena.  The people of Tennessee would be electing a U. S. senator in a special election in 1938.  Incumbent Senator George L. Berry was running hard to succeed himself while the combine of senior senator K. D. McKellar and his political partner E. H. Crump considered whom to support.  Carmack had been considered a likely candidate to run for the state Utilities Commission and his announcement he would run for the United States Senate came as something of a surprise.  Carmack issued a rather nebulous statement saying he was running “because I believe the views I hold upon public issues, and the fights I have made for them, are in accord with the interests and wishes of the people of Tennessee.”  Carmack had never been elected to any office previously and his “fights” on behalf of issues and the people of Tennessee could only be perceived through his brief time as a newspaper publisher.  Carmack was careful to note he was a strong supporter of President Franklin Roosevelt, whose popularity remained undiminished in Tennessee.  “I have been active in my support for President Roosevelt,” Carmack declared.  “I believe in him, and in the great humanitarian objective toward which he strives.”  Saying he intended to speak in every county in Tennessee during the campaign for the Democratic nomination for the Senate, Ned Carmack promised to make his views on the pressing issues of the day more clear to the average voter.

Ned Carmack’s announcement made him the third candidate to officially declare for the Democratic nomination for the U. S. Senate.  Senator Berry had already announced he was running to succeed himself and Congressman J. Ridley Mitchell, representative from Tennessee’s Fourth District, had made his own candidacy public.  Tom Stewart, District Attorney for a group of Middle Tennessee counties, soon followed with his own announcement and would prove to be a formidable candidate, especially as he had the open support of McKellar and Crump.

“Little Ned” Carmack gamely began campaigning in East Tennessee, accompanied by his seventy-six year old mother.  Former state senator J.T. Durham, who presided over the small audience, referred to Carmack as “the illustrious son of one of Sumner county’s most illustrious sons.”  The candidate was introduced to the audience by lawyer R. H. Harsh, who said, “Like his father, he is a man who would dignify and adorn any position he might hold.”  While Ned Carmack was the first candidate for the U. S. Senate to make a formal speech in pursuit of the Democratic nomination, little more was heard of his campaign until late June when it was announced by his campaign headquarters the candidate would be speaking in Brownsville, Tennessee.

W. Carmack then made sensational news in July when the Tennessean carried a photograph of the injured candidate being lifted in a stretcher to a waiting ambulance on the front page. The unconscious Carmack had been discovered lying in a ditch on a roadside near Paris, Tennessee at 1:30 a.m. Carmack was moved to a hospital in Rutherford County, near his Murfreesboro home.  Discovered not only unconscious, but bleeding, three separate police agencies began a determined inquiry into unraveling the mystery surrounding Ned Carmack’s discovery.  Carmack had been due to speak in Dresden and Paris, but had never showed up for his speaking engagements.  Carmack’s automobile had been found on the opposite side of the road from where the candidate had been found; the car had been run into a ditch.  A “brain specialist”, Dr. Cobb Pilcher, had examined Carmack and concluded the candidate had “suffered a pretty serious injury”, a brain concussion, but believed Carmack would make a recovery.  Carmack’s brother-in-law, J. W. Hart, was as puzzled as everyone else.  Hart agreed the case was “as much of a mystery as ever” and confessed he knew “absolutely nothing about how it could have happened.”  Authorities thought it odd that Carmack’s car, although in a ditch, “was not even scratched”, although the candidate was found with his legs paralyzed and blood pouring from his nose and mouth.

Police were having an exceptionally difficult time piecing together the details of Ned Carmack’s journey.  Evidently, Carmack was in Dresden, yet never stopped for his speech, but was seen asking a boy how to get to Paris.  Carmack was seen at McNutt’s Luncheon and Service Station around 7:00 p.m. when he stopped for gas.  Yet Carmack was on foot, telling Mr. McNutt his car was down the road.  Carmack took a can of gasoline and later showed up in his car and Mr. McNutt wondered if he might fill Carmack’s car up with gas.  Carmack replied he didn’t have any money and would have to travel to Paris to get some.  One patrolman admitted it was difficult to make sense of the story of just what happened to Ned Carmack at this point.  The patrolman noted Mr. McNutt claimed to have seen Carmack around 7:00 p.m. and remembered that Carmack was bleeding from his nose when he had gotten the gasoline.  The owner of “Bunkwood”, a roadhouse establishment, insisted Carmack had not put any gasoline into his automobile until 11:00 p.m.

That was the last time anyone saw Ned Carmack until he was found unconscious and bleeding.