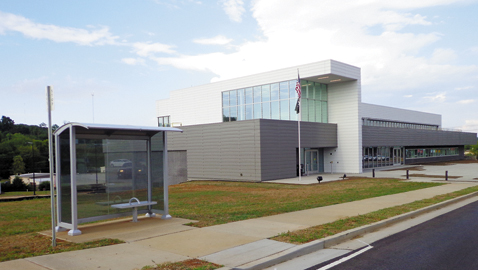 The Knoxville Neighborhood Council met Wednesday afternoon in the new Public Works Service building at 3131 Morris Avenue and Senior Director David A. Brace explained the building was constructed on a brown field site of the former Foote Mineral Company. The council usually meets in the Cansler YMCA but was invited to meet at the new facility and tour the building.

Brace said the Neighborhood representatives were the first citizens to tour the new facility which has not yet had an official ribbon cutting or opening. He described the large building as a “place the neighborhood can use and great for public meetings.”

The new building is a backup for the City-County Building, has an emergency generator, and is houses most of the Public Works offices of the city. Some 265 Public Works employees work in and out of the building. The department oversees everything from garbage and brush pickup, to maintenance of the 140 structures of the Parks and Recreation Department, street and sidewalk repairs, and codes enforcement.

“Public Service is your boots on the ground,” Brace said, adding that the department has “just moved in here” and the building has geothermal heating, modern LED lighting, lots of light from large windows, and is a “smart building” that turns off lights in rooms not being used.

Eventually employees at the site will have access to a soft-surface greenway trail around the site that may be connected with local greenways along nearby Liberty Street.

Unlike the police and fire departments the Public Works department operates, for the most part, behind the scenes. The department is responsible for many direct services and its duties are everywhere you look. The employees make sure homes, apartments and places of business are safe and secure, sidewalks are repaired, waste is disposed, and parks and greenways are maintained.

The department consists of Engineering, Fleet Services, Parks and Recreation, Plans Review and Inspections, and the Public Service Department. The 45,560 square foot building was designed and built by Barber McMurry and maximizes energy efficiency, natural light and views for the majority of occupied spaces.