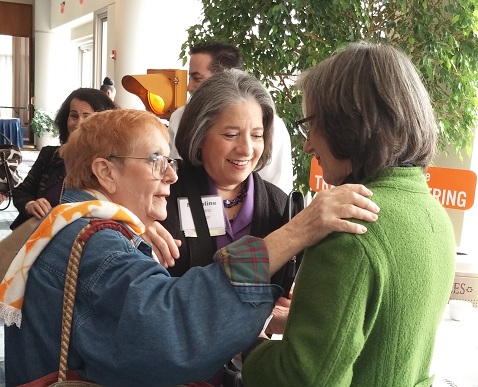 More than 450 people turned out for the Neighborhood Awards and Networking Luncheon at the Knoxville Convention Center recently. The annual event featured exhibits from various city and county agencies, companies, and the presentation of the Diana Conn Good Neighbor of the Year Award.

David Gillette of Mechanicsville received the Good Neighbor award. Eleven community leaders were nominated by their neighbors in response to a call by the Office of Neighborhoods back in January.

Gillette was born and raised in Mechanicsville and was honored for his leadership in putting on the Mechanicsville Homecoming Parade, engaging in community outreach and in finding funds and arrangements to create and install a neighborhood entrance sign.

“There is one main reason that the city stages the annual gathering of neighborhood leaders and neighborhood-level community activists. We know that a successful city depends on great neighborhoods which in turn depend on effective, well-managed neighborhood associations,” said David Massey, Coordinator of Neighborhoods.

Citizens from across Knoxville and Knox County had an opportunity to meet and chat with Mayor Madeline Rogero and various city and county officials.  Rogero opened the program and Rev. Daryl Arnold gave the keynote address. Arnold is pastor of Overcoming Believers Church and active in Girl Talk, Inc., the Save Our Sons Task Force, and is on the Knox County School’s Disparities in Educational Outcomes.

Arnold asked everyone to walk a mile in another person’s shoes and challenged neighborhood groups to do their part to address the needs of youths in their communities.

The efforts over the past year of seven neighborhoods were recognized including the Edgewood Park Association for bringing neighbors together to foster a sense of community; the Fountain City Town Hall for making “Honor Fountain City Day” a Memorial Day tradition; the Lake Forest Association for boosting neighborhood pride  and a positive image of South Knoxville; the Lindbergh Forest Association for embracing diversity, confronting adversity and building community; the Mechanicsville Community for 10 years of successful homecomings and representing the issues and concerns of residents; the River Hill Gateway Association for giving a voice to residents and institutions on the downtown riverfront; and the West Haven Village community for bringing residents together for a friendlier, stronger and more enjoyable neighborhood.

“It was a great celebration of grassroots community building. But it also was a salute to the many neighborhood leaders who lovingly and tirelessly volunteer their time, week in and week out, to strengthen their communities and improve every family’s quality of life,” Mayor Rogero told The Focus.

“I heartily congratulate David Gillette of Mechanicsville, the 2016 Diana Conn Good Neighbor of the Year honoree, and the other 10 outstanding finalists nominated for the award due to their leadership and acts of kindness in their neighborhoods,” the mayor said.