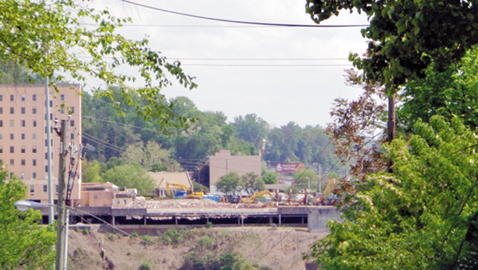 Photo by mike steely
The demolition of the old Baptist Hospital is well underway. Once the demolition is completed, construction begins on the hotel and retail shops there. A river walk will connect the facility to the City View Apartments on the other side of Chapman Highway.

It’s obvious to anyone passing by or looking at the old Baptist Hospital site that something is happening on Knoxville’s south waterfront.

Yet, the demolition of the old hospital is not the only thing happening across the river. Within a few years the entire south side of the Holston River will begin take on a totally different look.

A 20-year plan was adopted under then Mayor Haslam to shape up the south side.

A few things are holding up parts of the development but Dawn Michelle Foster, Deputy Director of Redevelopment, told The Focus that the eastern end of the project is pretty current. Tentative plans call for the river walk to go beneath the Henley Street Bridge.

Also in the long-range plans is a pedestrian bridge from the south side of the river to the University of Tennessee campus.

Suttree Landing Park and Waterfront Drive are part of Phase One on the eastern end of the proposed river walk. Bids have been taken on the Waterfront Drive construction and are under review by the city. The park is temporarily on hold as the Tennessee Valley Authority investigates pre-historic archeology there. Foster said that staff changes at TVA have delayed the process but that the city hopes to break ground at the park this September.

The drive will run from Barber Street to Foggy Bottom. The idea is to disturb neighborhoods as little as possible. One proposal looks to do that by adding a round-about where Sevier Avenue meets Island Home Avenue.

Waterfront Drive will be north of Langford Avenue and access would be through extensions of Barber, Dixie and Foggy Bottom Road. The park will sit between the drive and the river walk. Plans call eventually for a new boathouse and pavilion and design modifications are under review by TVA.

Just beyond the end of Waterfront Drive a new 120 apartment complex recently got approval in Island Home and construction may start later this summer.

The South Knoxville Alliance is made up of businesses in the 37920 zip range and the idea is to strengthen the area by promoting it. South Knoxville is one of the unique areas in our community and keeps its members and the public informed of events there.

After a few years of almost being isolated because of the repairs and closure of Henley Street Bridge, the alliance is bustling now with stores, shops, boutiques, service groups, banks and some very unusual businesses.

Vickie Johnson at God’s Place Thrift Store recently joined and said it has helped her shop a lot and she’s only one of the many South Knoxville businesses benefiting.

The regular monthly meeting of the Alliance will be today, June 16th, at 6:30 at the Labor Exchange building next to the Disc Exchange on Chapman Highway. The Alliance is also promoting a Fort Dickerson Quarry clean up Saturday, June 21st and will supply gloves, water and trash-picker-up and will meet on Augusta Avenue.

Terry Caruthers, of Colonial Village Neighborhood Association and a member of the Knoxville Neighborhood Advisory Committee, said they are looking forward to the opportunities that the South Waterfront Projects may bring and future development that should spread southward onto Chapman Highway.

“We are also looking forward to the upcoming realignment of the roadway and new entrance for Fort Dickerson. A dedicated group of volunteers meets regularly to clean up the park and reclaim its beauty and natural growth,” Caruthers said.

“We again claim bragging rights regarding our Urban Wilderness Trail system in south Knoxville. The National Park Service recognized the South Knoxville Loop with its National Recognition Trail award,” Caruthers said. “None of this would be possible without the foresight and guidance of Carol Evans and Legacy Parks and without the efforts, dedication, and many volunteer hours of the Appalachian Mountain Bike Club.”

Vice-Mayor Nick Pavlis will meet with local South residents at 9 a.m. on Saturday, June 28th, for “Coffee with the Councilman.” Anyone wanting to talk with Councilman Pavlis is invited to the Roundup Restaurant at that time. He said he holds the coffee meeting the last Saturday of each quarter and “It’s generally a good time with lots of discussion.”

Pavlis has been instrumental in getting the H-1 Historic Overlay for the exterior of the Kern’s Bakery Building on Chapman Highway.

“Many of those (former) employees are my constituents and they wanted to save it. I hope it will be developed and probably will be utilized as some type of housing,” he told the Focus.

“The bridge opening has helped the merchants tremendously. The increase of traffic means dollars to our merchants. It was a long time coming but they were organized, focused, and planned an event for the fall to promote themselves,” he said.

On June 28 from 1 p.m. until 11 p.m. is the Meadow Lark Music Festival at Ijams Nature Center, and is one of the member events being promoted by the Association.

Other South Knoxville events coming up include a meeting of the South Haven Community, June 26 at 10 a.m. at Hillcrest United Methodist Church at 1615 Price Avenue. On Thursday, June 26 the Old Sevier Community Group meets at Stanley’s Greenhouse at 3029 Sevierville Pike.