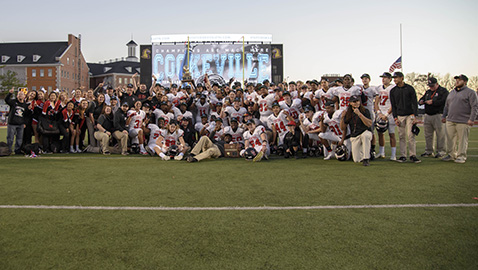 Henry was enough to handle, but Central High’s football team also had to deal with Lorraine and Wendy – Mother Nature’s two daughters – to claim this year’s TSSAA Class 5A state championship.

Lorraine drenched Tennessee Tech’s Tucker Stadium and brought in so much lightning and thunder it postponed the title game that Dec. 2 night.

When the Bobcats returned to Cookeville the following day for the makeup game, they were greeted with sunshine and blue skies. But Wendy also was there and her strong winds affected the game’s play from start to finish.

The result was both teams’ passing and kicking games struggled advancing the ball going into the wind, which was blowing in a southwest direction at a speed of 17 miles per hour at the start of the contest and got stronger.

In fact, all of the game’s scoring took place at the southwest end of the field.

“The wind was pretty rough,” said Central quarterback Dakota Fawver after the Bobcats’ 14-9 victory over Henry County in the Blue Cross Bowl. “We couldn’t really throw it too good going into that one end zone.”

The day after the game, Bobcats Coach Bryson Rosser estimated the speed of the wind at “25 to 30 miles per hour” in a radio interview in Knoxville.

Statistics also reflected the windy conditions. Fawver completed only 6 of 12 passes for 106 yards, far below his average. Patriots quarterback Will Parrish connected on 8 of 20 for only 72 yards. Surprisingly, there were no interceptions.

But Wendy did cause some odd plays. Once she blew the ball off the kicking tee. On one kickoff the ball kept bouncing down field while players chased and tried to recover it, but ended up bouncing into the end zone for a touchback.

Punters for both teams had rough days. Central’s Carson Brengle averaged only 16.7 yards on three punts, with his longest netting 20 yards. Henry County’s Caleb Ferguson managed to average 28.2 yards on five attempts. A 46-yarder that sailed over Demetrien Johnson’s head when the wind died one time in the second quarter boosted his average.

To deal with the weather adversity, Rosser said he and his team just followed God’s plan.

“God has a plan for everything that we do, good or bad, whether we trust it or don’t want to trust it,” Rosser told reporters after the game. “It was His plan, His will for us not to play (Saturday) night and come into (Sunday), deal with the conditions and play against a really good Henry County team. I just couldn’t be more proud of my guys.”

Henry County trailed 14-3 entering the final quarter but would be going with the wind. The Patriots scored at the 10-minute mark to close within nine points. Deonte Middleton’s stop on the Patriots’ two-point try was big as it took away Henry County’s possible option to tie the score with a field goal.

The Patriots still had the momentum though and the wind.

Runs of three and six yards by Jaylon Foster made it third-and-one at the 21. Foster was given the ball again, but Kross Smith stopped him for no gain.

After a Henry County timeout at 5:31, Ethan Thompson was tackled for no gain by Xavier Washington and Daunte Holliday.

Central again couldn’t pick up a first down and its 20-yard punt into the wind was downed at the Bobcats’ 44 with 2:26 remaining.

Parrish’s 12-yard pass to Joseph Travis on fourth-and-seven kept the Patriots alive at the 29. An illegal substitution foul on Central at 1:24 moved the ball to the 24. Travis rushed for four yards to make it second-and-one at the 20.

Washington and Tyler Bost and the Bobcats’ defense wouldn’t let Henry County get any closer.

“Today it turned out warm and the sun was shining but the wind was blowing especially hard,” said Henry County Coach James Counce Jr. after the game as he spoke with the The Post-Intelligencer. “That led us to make some choices that would give us the ball with the wind behind our backs in the fourth quarter. That worked to our advantage at the end of the game and we had a chance to pull out the win, but we couldn’t make a big play here and there to get the job done.”

No sir, the Bobcats’ state title hopes weren’t going to be blown away.