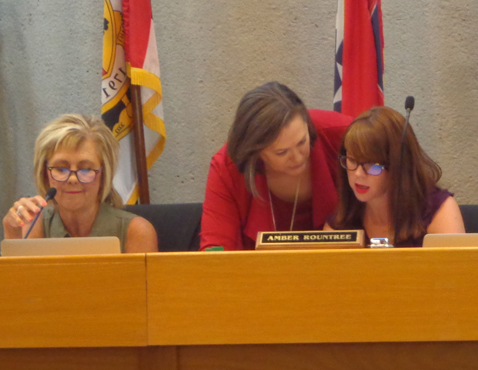 Politics continued at the Knox County Board of Education meeting Wednesday in two  incidents: a new chair and vice chair were chosen after a month’s delay and a single motion by one board member sidetracked a resolution.

First a letter from Mike McMillan was read in which he withdrew his name from the nomination for chairman.  McMillan was absent from the meeting due to medical reasons. This left Terry Hill’s name up for the chair seat but Hill told the other members she was withdrawing.

Tony Norman and Patti Bounds were nominated and Bounds was elected as chair. Then Norman and Hill were nominated for the vice chair position and two rounds of voting ended up in a 4-4 ties. Hill then withdrew and Amber Rountree was nominated by Lynn Fugate.

Rountree won the seat in a 5-3 vote with Susan Horn, Jennifer Owen and Tony Norman voting for Norman.

After both Bounds and Rountree took their elected seats the meeting proceeded with approval of the consent and regular items until the discussion of Rountree’s suggested resolution asking that the use of TCAP Data for teacher evaluations and students grades be waived for Knox County this year. (See related story.)

Four teachers spoke on the resolution, three in favor of requesting a waiver and one against.

It was obvious that Rountree’s resolution had enough votes to pass despite Interim Superintendent Buzz Thomas opposing it, but, following the comments from the audience, BOE member Gloria Deathridge spoke up with a “point of personal privilege” and moved that the matter be referred to the Teachers Advisory Committee. That body would consider the request and report its findings back to the school board’s meeting in November.

The Deathridge motion immediately halted any further school board discussion on the resolution.

The BOE members left the meeting thinking they will not be admitted to the Advisory Committee’s October 20 meeting at West High School to take part in the discussion. This committee consists of the Interim Superintendent, 18 teachers, two principals, and the President of the Knox County Education Association. Thinking this meeting was “closed” prompted Owen to say she had “some concerns” that passing the question to the teacher group “gives up scome of our own responsibility.”

After the meeting The Knoxville Focus asked Law Director Bud Armstrong if the BOE members could be excluded from the Teacher Advisory Committee and Armstrong indicated neither the board nor the press can be kept from the meeting. He said that the Sunshine (Open Meetings) Law applies despite attempts to close the meeting  because the Deathridge motion includes the committee reporting back to the school board with a recommendation.

The Knox County Law Department issued a memorandum to the school board Thursday stating that the Teacher Advisory Committee meeting MUST be open to the public and that one or more BOE members can attend.

Law Director Armstrong told The Focus Thursday afternoon that since the committee is an “advisory” group that ALL their meetings should be open to the public and press.

The TAC (Teacher Advisory Committee) meeting must be publicly noticed and open to the public, the press and all BOE members. The TAC, as it is presently created, is a functioning committee of the BOE and as such the Chairperson of the BOE should prepare and have circulated, the proper public notice of the TAC meeting(s).