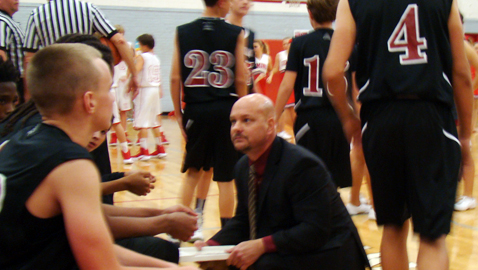 By Ken Lay
Jeremy Parrott is a new face in the Bearden High School boys basketball program.
Parrott, the former Cherokee High School head coach, was tapped to replace Mark Blevins, who resigned after last season, is one of a few newcomers in the program.
“We’re excited,” said Parrott. “We’re a little things team. We have to do the little things well. We have to rebound and we have to play good defense.
“We have the hard parts of the game down. Now, we have to work on some fundamental things.”
The Bulldogs, who were one of the top teams in Knoxville during Blevins’ 22-year run, began the Parrott era with a 26-14 victory over Halls Wednesday night in the Tennova Tip-Off Classic at Thompson-Boling Arena.
But the new coach wasn’t all that happy after the 12-minute exhibition contest against the Red Devils.
“We have to do better with the little things and they better come,” Parrott said. “Those are what are going to determine whether we’re just going to be a good team or if we’re going to do what we want to do,”
The pieces are in place as the Bulldogs return 11 players who saw time on Bearden’s varsity squad last year.
Junior point guard Dakota McGowan has started several games since he arrived as a freshman three years ago. Sophomore guard Trent Stephney emerged as one of the area’s top players as a freshman last year.
Other key returners who saw key playing time last year or dressed for varsity games last season include: Ques Fair (sophomore, guard); Drew Pember (sophomore, forward); Dre’Jean Dave (senior, center); Roman Robinson (sophomore, guard/forward); Trey West (sophomore, guard); Kordell Kah (sophomore, forward/center); Shawn Stacy (sophomore, forward); Shamarcus Brown (sophomore, forward/center) and Justin Ketterl (junior, center).
Bearden opens its season Tuesday at Grace Christian. The Bulldogs host Jefferson County Thursday night. Both the Rams and the Patriots made deep postseason runs last year.
Several other area teams were in action Wednesday.
Webb 16, Austin-East 14: The Spartans were balanced in a win against the Roadrunners.
Emory Lanier and Todd Walker each scored five points. Jarrett Kyle added four.
Ronney Pierson and Jalen Tate had three points each for Austin-East.
Farragut 23, Gibbs 15: Nick Rogers, the reigning District 4-AAA Player of the Year, scored 19 points for the Admirals.
Brennan Davis finished with 13 for the Eagles.
Carter 22, Central 9: Parker Haun had eight points to lead the Hornets past the Bobcats.
Karns 31, Fulton 27: Teahzjawon Hodge-Harper and Jefferson Holt had late buckets to lift the Beavers past the Falcons, who won the Class AA State Title in March.

In Tuesday night’s games: West edged Knoxville Christian 19-16; Christian Academy of Knoxville downed South-Doyle 23-11; Concord Christian School routed Tennessee School for the Deaf 34-7 and Catholic toppled Berean Christian 32-10.
West 19, Knoxville Christian 16: The Rebels boasted a balanced offensive attack against the Knights, who have had back-to-back stellar seasons.
Charles Dupree led West High with six points. Tyrone Patterson added five and Quez Johnson finished the 12-minute contest with four points.
Knoxville Christian, an independent school which will face some of the top Knoxville Interscholastic League squads this season, got five points from Aro Kacoull.
Concord Christian 34, TSD 7: The Lions boasted a potent and balanced offensive attack in their debut Tuesday as they had seven players score at least four points.
Matthew Massengill and Brian Lattimore scored six points each to lead the way for Concord.
The Vikings, meanwhile, got all of their offense from Marcus Jones on this night.
Catholic 32, Berean Christian 10: The Irish’s Jackson Rowan equaled the Eagles’ offensive output in this abbreviated game. Catholic also got eight points from Luke Jackson and six from Brock Jancek.
Jacob Dunn finished with five points for Berean Christian.
CAK 23, South-Doyle 11: The Warriors were hot from beyond the 3-point arc against the Cherokees. CAK made five of its seven outside shots en route to knocking off South-Doyle.
Isaiah Sulack and Turner Helton paced the Warriors with six points each while Hunter Reynolds added six.
The Cherokees got six points from Raphael Lee.