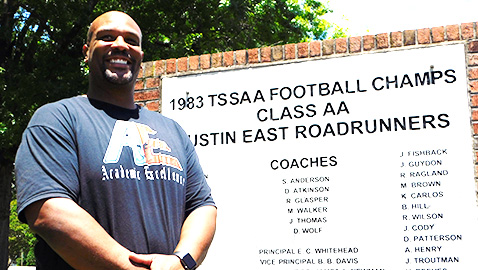 He feels strongly that his plan will produce victories on the field now and later in life for his players.

“There’s two numbers that we need to be concerned with,” he said Thursday. “That’s 3.0 and 21 on the ACT. Ninety-eight percent of high school athletes that play football will not go on to play in college as a scholarship athlete.

“Austin-East and Fulton are center city schools. The University of Tennessee has recognized A-E and Fulton that if we can maintain a core GPA of 3.0 and get a 21 on the ACT, our children can go to school there for free. That’s what is important to me.”

Mays, 42, has replaced Jeff Phillips, who resigned earlier this year after seven seasons as the Roadrunners’ head coach. He has been on the A-E staff for the past five seasons and the defensive coordinator the last four years.

“I absolutely want to beat and dominate every team that we play, but we’re going to use football to do something other than football,” he explained. “That’s why God put me in this place. Our kids need to be able to go into college and be able to deal with that academic rigor. Hopefully, the lessons they learn on that football field and the study table that we have throughout the week will prepare them for that.

“Once that ball is rolling, games will be won, because when you put things in place and start doing things the right way, winning becomes a by-product. If my main focus is to go out there and win football games, then I’m doing more damage than good to these families.”

Mays grew up in Iowa. He played high school football at Waterloo East and graduated in 1996. He was highly recruited by Iowa State and started at defensive tackle as a freshman.

He later transferred to Southern University and A&M College, a historically black university, in Baton Rouge and played one year with the Jacksonville Jaguars in the NFL under Tom Coughlin before being released.

Antonio fulfilled a promise to his mother, Elizabeth Anderson, and went back to Southern and earned his undergraduate degree in communications and sociology. He followed that with a stint as a graduate assistant at Northern Iowa.

In 2007, Mays became head coach at his high school alma mater in Waterloo and coached the Trojans for three seasons.

His wife, LaToiya, got a “great position” with Kimberly-Clark and that brought them to Knoxville. Antonio’s family includes son Jordan Snipes, 22, and 10-year-old daughter Kyndall Mays.

Mays first worked at Whittle Springs Middle School as a behavior interventionist and then with Project GRAD.

He said “it felt like home” as soon as he arrived at A-E.

“I’m real fortunate to be in this position and I thank God for putting me here,” he said. “I thank Ronni Chandler (Executive Director / CEO – Project GRAD Knoxville) for giving me her permission to apply for the job. I thank (A-E principal) Nathan Langlois and (A-E Athletic Director) Alvin Armstead for approving of me.”

Mays says his all-time favorite style of play is the old school smash mouth way. Move the chains and control the clock. He said Armstead has been trying to get him to play a 4-4 defense for years.

“But that style is not conducive to Austin-East,” said Mays. “We are Roadrunners and not just by mascot. You won’t find too many big kids around here, but our kids can run. So with that being said, we have to create a system that allows that strength to be showcased offensively, defensively and special teams-wise.

“Like I said in my interview, my offensive philosophy is a race to space. We’re trying to get our fast guy matched up with your guy and we think our guys are going to be a little faster than your guys.

“Defensively, we are an attacking, spilling defense. We’re going to make the ball spill and go outside. We want that offensive ball carrier to run laterally. We don’t want that ball to come straight at us. Whatever we need to do to make that ball bounce, that’s what we’ll do.”

Putting academics before athletics, Coach Mays plans to have a smart team as well.