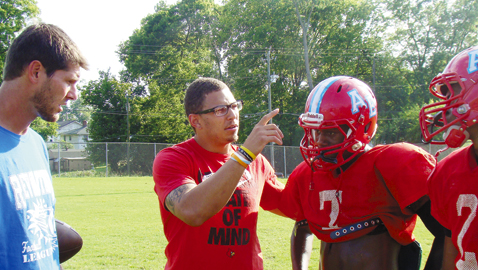 There’s a lot of newness in Austin-East High’s football program. It begins with Jeff Phillips, the Roadrunners’ new head coach, and continues with the entire varsity coaching staff, in which eight of its nine members are new.

Only Anthony McAlister, defensive coordinator and linebackers coach, was on the A-E staff last season.

This new look was quite noticeable as Austin-East practiced last Thursday.

As for the players, it’s a different story.

“Maybe eight on each side of the ball started last year,” said Phillips. “A lot of young guys got a lot of reps and a chance to play last year.”

That game experience will be one of the team’s strengths in 2013, after a 3-7 record last year.

The 28-year-old Phillips, a 2003 Austin-East graduate and a receiver and free safety on the Roadrunners’ 2001 Class AA state championship team, was just hired June 13. He replaces Brian Pankey, who returned to Kingston to be head coach of his alma mater after one year at A-E.

This is Phillips’ first high school head coaching job, although he has coached in Arena League football and overseas.

“I had one week with the team before the TSSAA dead period,” said Phillips, who now has had four weeks with his squad.

“We evaluated the talent fairly quickly. I think we have in mind who our starters will be, but the final depth chart will be set on August 9 after our final scrimmage at Campbell County.” A-E’s first preseason scrimmage was slated last Friday at Gibbs.

The Roadrunners are members of District 3-AA and will compete against Carter, Fulton, Gatlinburg-Pittman, Pigeon Forge and Union County for regular season honors. If they qualify for the playoffs, they will be classified 3A.

Although battles are still going on for starting positions, Coach Phillips mentioned a few players who have already caught his eye. Jaquail Williams, a senior wide receiver who also could contribute as a quarterback, already has received preseason recognition as one of the Knoxville area’s top players.

Phillips said senior Michael McMahan has “worked hard” and is a potential two-way starter as a wide receiver and defensive back.

Carlos Escobar is looking like he will be a valuable member of the Austin-East defense as a senior middle linebacker, and “his instincts” were the first thing Phillips mentioned about him. “He’s very smart. He’s making checks and calls, something you really need from the middle linebacker position.”

Davon Cantrell, a senior tight end and outside linebacker, also drew praise from Phillips. “He’s one of the hardest working kids we have. He arrives 45 minutes early doing extra work. He’s always looking for ways to get better.”

Jitu Booker is one Roadrunner A-E fans won’t have trouble spotting on the field this fall. He’s 6-3, 330 pounds, said Phillips. “He’s a leader on our line as a defensive tackle and offensive guard, and working hard to go both ways.”

Senior Emmanuel McHenry, a definite candidate at defensive end, is “one of our fastest linemen,” said Phillips. “He runs about a 4.7.”

Jackson McDowell, a 6-3, 250-pound senior, may be the starter at left tackle on offense, but the right tackle position, which will have to protect the blindside of A-E’s two left-handed quarterbacks, is “wide open,” said the coach.

Keishawn Johnson, a 5-11, 185-pound junior, appears to be ahead in the QB race for now. “He has stepped up and taken on bigger roles with our offense to win the position battle at quarterback,” said Phillips. “He’s an all-around player, very athletic and has a strong arm. We’re working with he technique. We’re expecting big things from him. He’s No. 1 on the depth chart.

“Xavier Ligon, a freshman athlete, is No. 2 and could catch up depending on how he does in scrimmages,” added Phillips. “Xavier (5-8, 165) is learning and getting adjusted to the speed of the game. He’s growing up fast. High school football is a little more complex than what he has been playing and there also’s new terminology.”

In addition to the carryover of game experience from last year, Coach Phillips expects “our competitive side” to be a team strength. He also pointed to a balance offense, with a running game that could be “dominant.”

Team speed is a key asset on defense.

“We take pride in flying around to the football and being very physical,” said Phillips.

Austin-East will open the season on the road at Grace Christian Academy August 23.