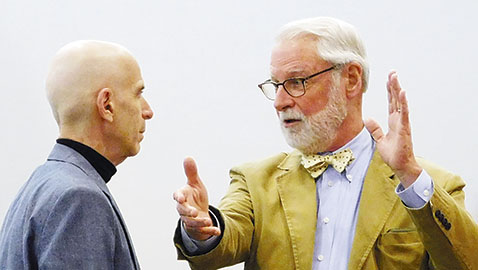 There are currently at least six Knoxvillians hoping to become the city’s next mayor and it is likely whoever captures the seat will get a higher salary than Mayor Madeline Rogero. Rogero receives $142,500 annually plus a car allowance.

The proposed increase would take the salary to $162,500 and is being sponsored in Tuesday’s upcoming City Council meeting by Vice Mayor Finbarr Saunders and Councilmembers Stephanie Welch and George Wallace.

City councilmembers will get a salary increase starting in January due to a former council vote and will go from $19,000 to $24,000 per year.  Leaving the council because of term limits are Saunders, Wallace, Marshall Stair and Mark Campen. Stair is a candidate for mayor and may or may not pass on a vote to increase the mayor’s salary.

“Being mayor is a huge job and we’re very low compared to salaries of other cities. Back when Bill Haslam was mayor the position paid $110,000 but he didn’t take the salary. In 2015 it was raised to $142,500. The job is getting bigger, it’s a full time job,” Saunders told The Focus.

Saunders said there were several city officials who actually make a higher annual salary than the mayor.

The council’s 6 p.m. Tuesday meeting will also vote on two honorary names of streets:  “Coach Rosser Drive” on Marion Drive and “Wanda Moody Overpass”  at I-40 and I-75 at North Winston Road. Bryson Rosser is the head coach of the Central High School football team that won the state championship in 2018. Moody is a former county commissioner and well known community supporter. Both honors are sponsored by Councilwoman Lauren Rider. Rider heads the Public Property Naming Committee and Congressman Tim Burchett attended a meeting and made the request to honor Moody.

The council will also hear resolutions that include an agreement and amendment with the state for an accelerated bus corridor on the Broadway Corridor, grant a variance to a hotel building wall to intrude into the right-of-way at 1706 Cumberland Avenue, and approve a contract with Service One Inc. for $1.2 million to maintain the city’s street lights through April 2020.

The mayor may be granted permission to apply for two state and federal grants in excess of $1.6 million for the Knoxville Area Transit System. Both require the city to provide matching funds of about $184,000.

Another closing date for the purchase of the Knoxville Supreme Court building at 719 Locust Street may be extended for 90 days. The Office of Sustainability is asking for the extension as the city and developer work out details of the sale.

The Texas Avenue Sidewalk Project may see an agreement with Cannon and Cannon for $75,000 to complete the walkway.

Reimbursement of federal and state funds may be accepted for damages in the city due to the February rain storms.