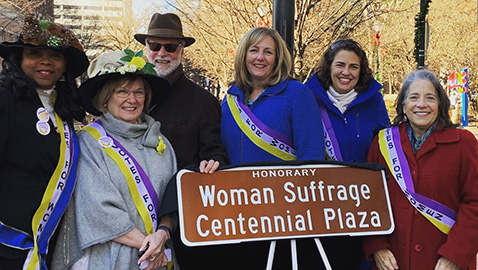 Councilwoman Lauren Rider is term-limited as chair of the Knoxville Property Naming Committee as her four years will end in June. The group of citizens meets when requests are submitted to name streets, buildings, parks, and other public properties and Rider told the committee recently that some changes in the process are needed.

“These are suggestions and have not been vetted,” she said. One of the things she said should be removed from the naming process is to remove “renaming” of places. That duty, she said, should begin in Knoxville-Knox County Planning.

That leaves initial approval of “honorary” place names to the committee. Honorary place names would be different colored signs that are posted beneath a street or place names. Examples of those include the Everly Brothers Park and Moody Bridge. The public is encouraged to make suggestions and in most cases the person being honored should have been a Knoxville resident for at least five years.

Other qualifications for honors include the person or event must: have made a major impact on local, state or national history; reflect the local values and character of the community; and be approved by a majority of adjoining property owners.

Some of the updates were suggested by former Councilman Marshall Stair, past chairman of the property naming committee.

The fee for applying is $262 but is waived for nominees from sitting city council members. Approval of the location of honorary signs would be reviewed and approved by the mayor or council.

The application forms are being reviewed and may be revised and once submitted are reviewed by the committee and submitted to the planning commission for research.

“I want you to be proactive,” Rider told the committee members, adding, “You can come up with something that has not been noted, our forgotten history.”

She also suggested inviting local experts from groups like the Knoxville History Center or Knox Heritage to attend committee meetings.

“The pandemic put us behind schedule because this wasn’t a priority. It doesn’t meet terribly frequently. The committee provides a fair process for review of applications. It started with Joe Bailey in 2004 and we have long strived to have an equitable process where the public has a chance to comment,” Rider said.