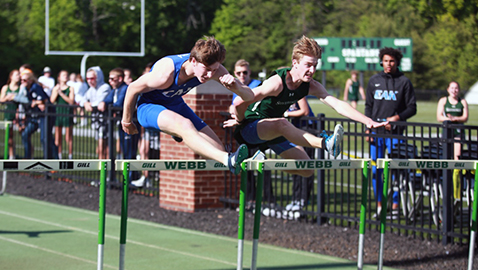 The newest member of Webb School’s track and field coaching staff has a world class background as an athlete.

Jerome Romain earned the Bronze Medal in the triple jump event at the World Championships in Gothenburg, Sweden in 1995 and was a finalist in the 1996 Olympics in Atlanta.

He started coaching the jumpers at Webb early this season.

It has become a win-win situation for both Romain and his new pupils at Webb.

Romain was previously coaching at IMG Academy in Bradenton, Fla., prior to his move to Knoxville. “It was for family reasons,” he said.

Before coaching at IMG, Romain had been an assistant coach at the University of Tennessee for five years (2009-14) under former men’s head coach J.J. Clark. He also had coached at Brown University in the Ivy League (2005-09).

Romain’s newest pupil at Webb, 8th grader Lennox Langham, had an impressive performance in her first-ever high school meet last week as she took top honors in both the long jump and triple jump in the TSSAA Division II Class A East Region sectional meet at CAK.

“She is very strong,” said Coach Romain. “Technically, we’ve got some stuff to work on. But she has a lot of tools.”

Lennox said: “I think I did good. I PRed, so that’s exciting. I still have some work to do with my approach and stretching out (after going airborne).”

Even though the sectional meet last Tuesday was the first time she had ever triple jumped, she took first place in that event too with a mark of 35-9½.

Webb Athletic Director David Meske, who was at the meet, said Langham had played on the varsity volleyball team last fall.

“I like volleyball more because I’ve played it longer,” said Lennox, “but the long jump is starting to get up there (as a favorite too).”

After a little rest, Langham started getting ready for the triple jump, an event she would be trying for the first time ever. She has been working on the long jump all season.

Coach Romain grew up in Dominica in the West Indies. He came to the United States to attend Blinn Junior College in Brenham, Tex. From there he went to the University of Arkansas and competed in the long jump and triple jump.

Although he was in the Top 12 and a finalist in the triple jump at the ’96 Olympics, he didn’t get to jump in the finals because he had suffered a knee injury.

FULFORD LEADS CAK: Ethan Fulford was a triple winner (pole vault, 100 hurdles and 300 hurdles) in leading Christian Academy of Knoxville to the boys’ team championship in the East Region sectional with 141.5 points.

CAK’s Malachi McNiel-Harrison also had a notable victory as he soared to a winning mark of 6-2 in the high jump.

The top three finishers in each event plus the top three at-large from the state’s three regions will advance to the TSSAA state meet at the Spring Fling next week in Murfreesboro.