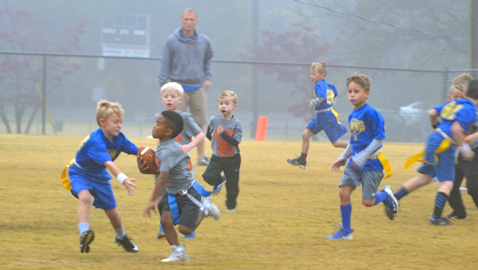 NewBreed is one of the newer commissions in the Knox Metro Youth Football League and its 9U team was among those that celebrated a championship this season.

The NewBreed players defeated No. 1 seed Seymour 18-13 in the Grasscutter NFC Division at John Tarleton Park in the youth league’s annual post-season playoffs.

Sixteen division champions in all were crowned.

NewBreed was established in July of 2014, said LaTonya Washburn, president of the commission.

“My daughter, LaTesha Washburn, coached flag football for another organization and decided she wanted to form her own organization, and it would be called NewBreed,” recalled Washburn.

“We started with one flag team. With the help of Joe Ward (Basketball Ministries International), our coaches and board members, we were able to meet with Aaron Browning (of the City of Knoxville Parks and Recreation Department) about becoming a commission.

“Three years later, we’re still growing and currently a non-profit organization working mainly with children from Districts 6 and 3, but we do have children from various parts of the City of Knoxville.”

NewBreed also had a 6U flag team and an 8U team this season.

“Next year we’re going to add a 10U team and build year by year,” said Washburn.

GREAT START: Shavar Young, in his second full season coaching and first as a head coach, guided Central to the Minor Pee Wee 10U AFC title. It was the Bobcats’ second unbeaten season in a row in the KMYFL.

Coach Young said he was most proud of how his players came to practice every day and were ready to work.

“At that age, I think parents and coaches forget kids have bad days too,” he said. “They may go to school and have a bad day that carries over to practice.

“Our players came to work every day and we expected a lot out of them. They did pretty good.”

GOLD RUSH: The Knoxville Falcons’ program had another banner year, with five championship teams and one runner-up.

Central and Powell had two division champions each. Seven other commissions had one title each.

SUPER SIX: In addition to Central’s 10U squad, five other teams went through the regular season and playoffs undefeated – the Falcons’ 14U, 9U, 7U and 6U teams and Oak Ridge’s 8U squad.