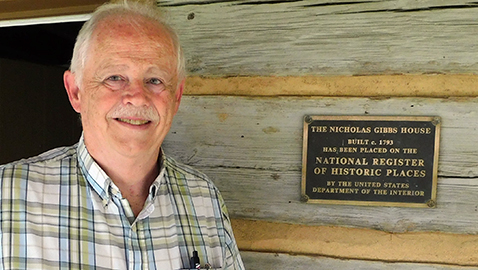 More than 100 descendants of Revolutionary War veteran and Knox County settler Nicholas Gibbs will assemble Saturday at the patriot’s original home on Emory Road. The event, sponsored by the Nicholas Gibbs Historic Society, will feature a tour of the home, a meal, a business meeting of the group, a historic presentation, and live music in the shelter behind the old home.

The Gibbs log cabin, built in 1793,  may be the oldest standing log structure in the state and society member Joe Longmire took The Knoxville Focus on a tour recently. The original claim of Nicholas Gibbs was for 450 acres and other acreage was later added.  Gibbs was a German immigrant who migrated to what is now Knox County and settled just east of Harbison Crossroads. The entire community there is also known as Gibbs and the elementary, middle and high school carry the Gibbs name.

Longmire said he hopes the gathering will generate enough money to continue restoring the old two-story house. He said it needs some new chinking as well as new logs although most of the logs are original, and the house has a groundhog problem. He said the society membership fee goes a long way in helping the continual restoration. Membership in the society is open to anyone who is a descendent of the Nicholas Gibbs family.

The old home was occupied until 1985 which is when the historic society bought it. Since then the later additions to the home have been removed and the structure cared for and nursed back to its historical appearance. Longmire, a Gibbs descendant, said that many people in the area are also descended from the settler.

Inside the home are period pieces  and relics unearthed by archeologists from the yard. Two of the items are original to Nicholas Gibbs including a small cast iron pot used to melt lead and a grandfather clock. The clock is only in the home during the annual Gibbs family homecoming.

Back then there wasn’t another home nearby on the stretch of the historic Emory Road and many people, including Andrew Jackson, may have stopped there Longmire said. The society is still piecing the patchwork of history together for the home.

Longmire said that descendants from across the country come in for the society meeting including people from Texas, Alaska and Washington.

Nicholas Gibbs was a volunteer in the Battle of King’s Mountain and served as a Justice of the Peace. He had seven daughters and six sons and several sons served in the War of 1812. Gibbs was killed in the Battle of Horseshoe Bend in Alabama and a relative found his shot bag which contained Coffee Tree seeds which were planted at the Gibbs home and continue to live yet today. The log home stands at 7633 East Emory Road and was held in the family for more than 200 years.

Longmire is urging visitors to bring chairs to the event, which begins at 11 a.m. The home will be open for tours at 9 a.m. The home is located one-half east mile of the Tazewell Pike and Emory Road intersection. He said that a nearby church lot may be used for overflow parking.

You can get more information about the event and Nicholas Gibbs on Facebook. Descendants unable to attend are urged to mail the membership fee, $40 per family, to Ms. Sonja Collins, 9822 Emory Road NE, Corryton, Tn. 37721-3001.