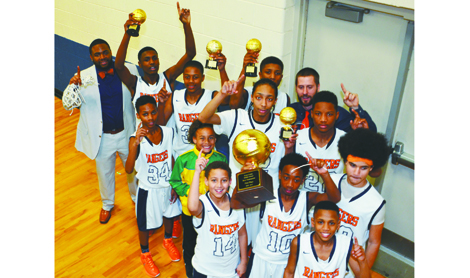 Comer, in his 16th season as coach at West Valley, said Northwest was one of the top two teams he’s seen in Knox County over the years, after the Rangers raced to a 70-49 win over his Wolves in the Knox County tournament finals held at Karns Middle School’s Thomas L. Duff Memorial Gymnasium.

The victory capped Northwest’s second straight undefeated season and stretched the Rangers’ win streak to 46 games, dating back to the 2013 post-season tourney.

“I just told the boys in the locker room this is probably the first or second best team I’ve seen,” said Comer. “They could probably beat a lot of freshmen and JV teams around town. I think they’re that good.

Northwest (XX-0) took off to a 13-0 lead in the game’s first three minutes and was never seriously challenged, although the Wolves continued to battle.

“Tonight I think it was a very good performance,” said first-year Northwest Coach Sean Green. They came out aggressive. They did the things I asked them to do – the small things, boxing out, denying the ball, working hard. I’m very proud of them. The team effort was great.”

Coach Green inserted reserves and West Valley cut the gap to 60-47. Green put his starters back in and they quickly extended the lead back to 20 before coming out for good with a minute remaining.

Northwest rolled through the tourney, toppling Farragut 56-21 in the quarterfinals and eliminating Vine 47-31 in the semifinals.

West Valley notched an exciting 65-63 overtime win over Holston in the semis as Pember hit a tying 3-point shot in the last second of regulation.

THIRD PLACE: Vine got off to a good start and defeated Holston 52-42 in the consolation game. Jaiohn Foster scored 17 points to lead the Golden Bears, who led 27-18 at halftime. Ronney Pierson added 12 points and Sufyan Rasheed-Abdul eight.

Vine connected on 11 of 11 foul shots in the final period, with Foster sinking eight of them.

Trey Davis (13) and Jamal Rorex (11) were best for the Hurricanes. Sean Oglesby chipped in nine points and Jarrett Kyle seven.