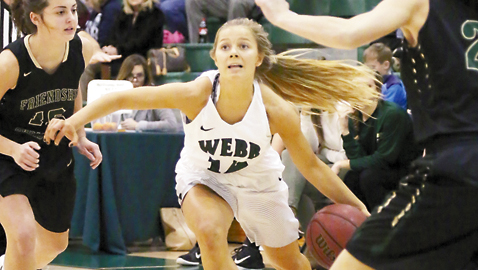 Over the past 10 seasons, Webb School’s girls basketball program under Coach Shelley Collier has played in nine state championship games.

Five times the Lady Spartans have struck gold. Four times they have brought back silver. Only in 2010 did they not make it to the finals.

The Webb girls finished first in their district in regular season play but were unranked in The Associated Press’ Division II poll as they headed into post-season district tournament play last Friday night at Friendship Christian.

“We finished our regular season at 19-9,” said Collier via e-mail last Thursday. “It is not our best record, but basketball is a tournament sport. We started out 0-4 and have played and lost to some of the top teams in the state (Bradley Central twice, Upperman, Gatlinburg-Pittman, Morristown West, William Blount and Fulton).

“We have experienced some adversity with injuries and sickness and are trying to recover and get everybody back healthy to start post-season play. We have had our top six players out for one reason or another and some of them at the same time for extended periods. We have played a lot of young players. Hopefully, that will help us as we go into tournament action.

“This is a new season though and our record is now back to zero. Anything can happen. Our goal has not changed. We want to have a chance to get back to the state tournament and play for a state championship.”

Regardless of how Webb placed in its district tourney over the weekend, the Lady Spartans will be in a play-in game at home Tuesday (Feb. 14) with a region tourney berth on the line.

Collier said her team will have a better chance of making the state tournament if it can finish first or second in the region at BGA and get a sub-state game at home on Feb. 24.

“It would give us a better chance if we could avoid going to Memphis this year like we did last year,” noted Collier.

The veteran Webb coach said she believes in this year’s team.

“I do love this team and the fact that they are a close team,” she added. “Do not count us out!”

Webb began the season with a starting five of sophomore point guard Casey Collier, senior wing Emily Wyrick, junior wing/forward Haylee Luttrell, senior wing Sydney Collier and senior post Reagan Munday, who has been sidelined with a torn labrum since the Fulton game but could return to action this week.

“She is someone we have definitely missed,” said Coach Collier. “We need her back.”

Bearden will play in the District 4-AAA tournament semifinals Friday at HVA. Depending on how they fare in the semifinals, the Lady Bulldogs will play Monday, Feb. 20, in either the district championship or consolation game.

Fulton (20-4) has a chance to reach the state in Class AA. The Lady Falcons cracked the Top 10 rankings at No. 10 last week. They were scheduled to play Oak Ridge (No. 3 in Class AAA) this past Saturday night.

Fulton will be in the District 3-AA tournament Feb. 17-21 at Austin-East.

The top four teams in each district qualify for region play.