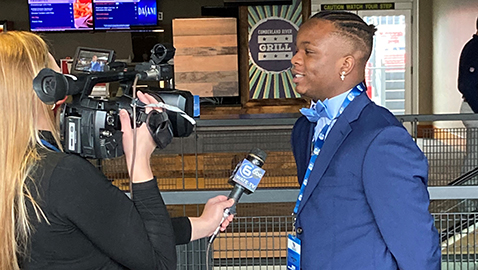 JD Dunn didn’t return from Nashville with the Tennessee Titans’ Mr. Football award last week, but the Christian Academy of Knoxville junior running back is already aiming for a return trip in 2021.

Pennington, a 6-5, 326-pound offensive guard, has committed to Clemson.

Awards were presented to 10 winners and Dunn was among 20 finalists at the presentation held at Nissan Stadium.

“JD was very pleased to be included as a finalist and was happy to represent the Warrior football program,” said CAK Head Coach Travis Mozingo, who accompanied Dunn on the trip.

“As you can imagine, being a finalist, but not winning will be a great motivator as we go into the off-season. In our conversation on the ride back to Knoxville, JD made that clear.

“Like all well-rounded football players, he has personal goals that coincide with our team goals. He’s eager to return to Nashville next year, but knows earning that trophy and recognition will not come without a great deal of personal and team work.”

Dunn had a magical season, bursting onto the Knoxville prep scene and leading the Warriors to their first-ever undefeated regular season before being eliminated by Goodpasture 61-43 in the second round of the playoffs.

Central senior linebacker Kalib Fortner also was a finalist for the Mr. Football award in Class 5A, which went to Prince Kollie, a David Crockett High running back who has committed to sign with Notre Dame.

“It was a great honor to be gathered in the same room with high achieving coaches and players from across the state,” said Coach Mozingo.

Knoxville’s two finalists did not have any interaction at the event.

“Social distancing guidelines limited much of the interaction with anyone not in your party,” said Mozingo.

Due to the COVID-19 pandemic, fewer people were permitted to attend this year’s awards ceremony compared to previous years.

“This is such an outstanding honor for all 30 of the young men recognized today at the Tennessee Titans Mr. Football Awards,” said Bernard Childress, Executive Director of the TSSAA. “They were here not only due to their athletic ability that they displayed on the field throughout the season, but just as much for their outstanding character and academic achievements.”

High school head coaches and members of the media nominated the finalists. A committee of statewide sports writers selected the winners based on performance in the 2020 regular season. Academics and character were also taken into consideration.

The awards were presented to the top football players in each of the nine classifications of the TSSAA and also to the state’s top kicker regardless of classification.

The Titans became sponsors of the Mr. Football Awards in 2007.