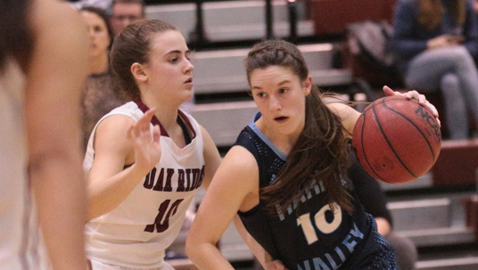 But things didn’t go well for the Lady Hawks at Wildcat Arena. HVA scored the first basket of the game but its offense was all but stifled for the rest of the frame in a 71-42 loss to Oak Ridge.

Paige Gentry gave Hardin Valley the lead with a 3-pointer to open the game but the Lady Wildcats responded by closing the first quarter on a 19-2 run as they forced Hardin Valley into multiple turnovers and surrendered only contested looks at the bucket.

“I think this being our first time in this ballgame was a factor,” HVA coach Jennifer Galloway said after her team dropped to 23-9 with the loss. “Oak Ridge is a very good team and they played well tonight.

“They’re a team that has the capability to go on runs and they did that tonight.”

Oak Ridge (29-3) successfully defended its 2015-16 Region 2-AAA Title with Wednesday night’s victory. The Lady Wildcats have won multiple region championships in their storied history. They claimed their latest in front of a spirited and partisan home crowd.

“We love playing at home in front of our crowd,” Oak Ridge coach Paige Redman said.

Redman and her team may love to play in the friendly confines of Wildcat Arena, but on this night, the Lady Wildcats executed their defensive game plan flawlessly and were able to get open shots. Things might’ve been worse for the Lady Hawks if Oak Ridge hadn’t missed several layups.

“I just wish that we would’ve hit more of those layups,” Redman said. “Our scout showed that if we came on and jumped on them, it would be effective and we knew that their guards would come out aggressive and they did. We gelled well tonight.

“It all starts with our defense and we played well on both offense and defense.”

After surrendering the game’s first bucket, Oak Ridge’s defense kicked its defense into high gear and took a 27-7 lead when tournament Most Valuable Player Jada Guinn scored with 5 minutes, 54 seconds remaining in the first half.

“We had a lull there where we didn’t score and things slowed down,” Redman said. “Before the game and at halftime, I asked the kids what kind of team we wanted to be.”

The coach got her answer as the Lady Wildcats scored the first 16 points of the third stanza and opened a 49-20 lead when Courtney Ellison knocked down a long-range jumper with 4:32 left in the third quarter.

Both teams played in state sectional games Saturday but results were not available at press time.

“Both teams are still one game away from the state tournament,” Galloway said.

Oak Ridge boasted a balanced attack on this night.

Guinn scored 17 of her game-high 24 points after halftime. Mykia Dowdell added 19 while Jaymi Golden and Ellison finished with 10 points each.

Abbey Cornelius scored 15 points to pace the Lady Hawks. Buxton had nine. Bekah Hampton added seven while Madison Clevenger finished with six as she came off the bench to nail a pair of 3-pointers in the third quarter.