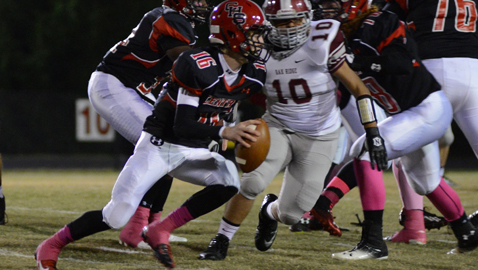 A Central High offense that was averaging 35 points per outing could only reach the end zone twice Friday night.

A young Oak Ridge defense that continues to grow up had a lot to do with it. The Bobcats’ own mistakes also were a factor.

The end result was a 24-13 victory for the Wildcats on a cold night at Dan Y. Boring Stadium, a win that keeps the Ridgers’ District 3-AAA regular season title hopes alive.

With one week remaining, Oak Ridge, 6-1 in the district and 7-2 overall, is in a three-way tie for first place with Anderson County and Campbell County. The Wildcats will host Anderson County in this week’s Rivalry Thursday matchup on MyVLT.

Central (4-3, 4-5), which could have passed Oak Ridge in the standings with a win, will try to get back to the .500 level this Friday against visiting Gibbs, which is coming off a 28-14 win over Powell.

“Our defense holding them to 13 points was critical,” said OR Coach Joe Gaddis. “No one does that to Central, and we did tonight. That was really key.”

Austin Kirby, Central’s sophomore quarterback, completed 17 of 26 passes for 202 yards and one touchdown but spent a lot of the evening being chased by Wildcats on Joel Helton Field. Five times he was sacked or dropped for a loss.

The unseasonably cold temperature appeared to affect both teams’ ball snapping. Six different times in the game there were errant or botched snaps – three by each team.

Central missed a golden opportunity to score on the game’s opening possession, as JaJuan Stinson was wide open at the Oak Ridge 20-yard line, but the fourth-down pass sailed over his head. There was only green grass between Stinson and the goal line.

Central took a 6-3 lead with its best drive of the game in the second quarter, but Oak Ridge regained the upperhand just before intermission and added two more second-half touchdowns before the Bobcats would score again.

“They came out and kind of punched us in the mouth a little bit both offensively and defensively,” said Central Coach Joe Hassell.. “I thought our kids, as the game went on, reacted pretty well. We just weren’t able to score enough points and hold them under enough points for us to win.”

Oak Ridge also had some underclassmen who stood out on offense, particularly sophomore running back Isiah Jones, who ripped off gains of 9, 32 and 14 yards the first three times he touched the ball, leading the way for a 32-yard field goal by sophomore Brandon Nickle – the first points of the contest.

Jones, a hard-churning 6-foot, 175-pounder, racked up 136 yards on 18 carries and also had a 24-yard catch before suffering a knee sprain early in the fourth quarter.

“It was all about the line,” said the modest Jones. “They did their job. I followed their blocks and they got me where I needed to be. I’ll be back for the AC game.”

Mixing the run and the pass, Central drove 66 yards in seven plays to go ahead in the second quarter. Junior receiver Cedric Washington had three catches in the crisp march, including a 17-yarder from Kirby for the TD. The PAT kick failed.

Oak Ridge, twice converting on third-and-10, went 78 yards in 13 plays to score just before the half ended. Senior quarterback Jaylin Henderson ran right, behind a lead blocker, for the last yard. Nickle’s kick gave the Ridgers a 10-6 lead to take into the dressing room.

“That was really big momentum-wise for us,” said Gaddis, who guided Oak Ridge to a state title in 1991 and started his second stint with the Wildcats just this season.

Central was moving the ball on both of its third quarter possessions, but each drive was killed by a single play. On second-and-eight at the OR 36, Kirby was thrown for an 11-yard loss by soph Gavin Warrington. Later, on first-and-10 at the OR 30, a high snap caused Kirby to lose 19 yards.

In between those two Central possessions, freshman Tee Higgins got behind the Bobcats’ secondary to haul in a 40-yard TD pass from Henderson to increase Oak Ridge’s lead to 17-6. Henderson would finish with 9 of 22 completions for 147 yards.

The Ridgers pretty much delivered the knockout blow with a 14-play, 76-yard march that took over seven minutes off the clock and carried over into the final quarter. Kyler Jones (5-9, 220) got a key first down on fourth-and-one at the Central 13, then plowed over from the 6 two plays later. Nickle’s PAT made it 24-6 with 7:25 to go.

The Bobcats didn’t quit, but now the clock was against them, too. Josh Poplar scored from the 3, after Kirby hit fellow soph Lyndon Wilson with a 30-yard pass on fourth-and-24. Eli Holbert’s kick cut the gap to 11.

With only 3:18 left, Central attempted an unsuccessful onside kick. The Bobcats got the ball back with a little over two minutes to go but failed to pick up a first down.

Poplar had a strong night running the ball, with 96 yards on 12 carries. JaJuan Stinson added 57 yards on eight tries plus caught four passes for 40 yards. Running back Jeremiah Howard, standout sophomore, was sidelined with an injury.

Hassell doesn’t know what his team’s playoff chances are now. “The way the TSSAA is, all I know is we need to win,” he said.