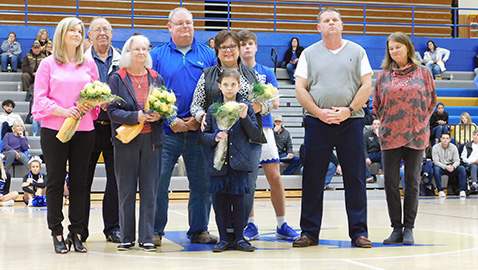 From elementary school through high school, Lee Henson went to Karns. Except for his time in college at Carson-Newman, he’s always been at Karns as a student, player and coach.

Fittingly, in his 26th season as a basketball coach at Karns High, he was honored Tuesday night with the official announcement that the Beavers’ gym floor now bears his name.

Henson’s family joined him at center court for the recognition and announcement between the girls and boys games against Clinton. Karns fans on hand applauded their approval.

Henson, 48, is one of the youngest coaches in the Knox County school system to have an athletic court or field named in their honor, if not the youngest.

“It’s a high honor and I appreciate all the people behind the scenes that have done this for me,” said Henson, who is in his 19th season as the Beavers’ head coach. “That’s what it’s all about.  It isn’t about me. It’s about people I’ve been with and got me to where I am today. I just want to thank everybody.”

Henson was an All-State basketball player at Karns and played at Carson-Newman.

After graduating from C-N, he took a teaching position at Karns Middle School and started coaching basketball at the high school, beginning as the freshmen coach. After three years at KMS, he started teaching at the high school and continued to be an assistant coach until being named the varsity head coach in 2001.

During the recognition of Henson’s coaching career, his record was announced as 323-194 with three district championships. His teams also have advanced to region tournaments and Sub-State playoffs and he has earned “Coach of the Year” honors.

“It’s just an opportunity to recognize somebody that’s really represented the community in a high capacity as an athlete, but then came back and has coached about as long as anybody in the business,” said Brad Corum, who is in his fourth year as Karns’ principal and started teaching at KHS the same year (1997) Henson did.

“He just has done a great job for us and it’s something that we wanted to do for him and his family.

“Your successful coaches now have good relationships with their kids and they pour a lot into their lives,” added Corum, “and I think Lee does that with still demanding a high level of play from them.”

KARNS FALLS: District 3-AAA game action Tuesday saw Clinton hang on for a 58-57 overtime win over Karns. Two clutch free throws by Lane Harrison with nine seconds to go put the Dragons ahead by one. The Beavers missed two shots inside as time expired.

Karns’ J.J. Faulkner also had a driving six-foot shot that went in and out at the end of regulation play.

Evan Winchester led Clinton with 22 points. Karns got 23 from Trey Hawkins, 17 from Traven Jackson and 13 from Dalton Greer.

In the girls’ game, Clinton almost reached the century mark in a 97-53 victory. Sarah Burton led the Lady Dragons with 33 points. Avery Lockhart had a game-high 15 for Karns.