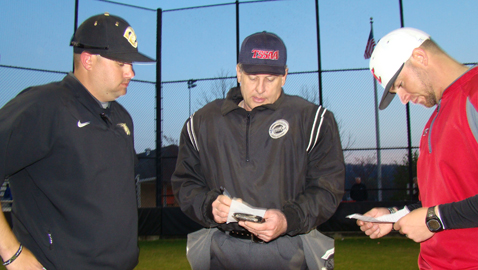 Charlie Byrd introduced his sons to the game of baseball years ago. He coached them and watched them play in many games. But what his eyes saw on a beautiful early spring afternoon last week was a first.

Matt and Jonathan “Turtle” Byrd were on opposite sides as head coaches of Central and Giles County, their two respective high school teams, and about to play a doubleheader Wednesday at Tommy Schumpert Park.

As happy as Charlie was for his sons in regard to their chosen profession, he agonized over this brotherly matchup. Dad and other family members were caught in the middle.

It was indeed a day of mixed emotions for all involved.

“Not a lot of fun,” said Charlie behind the backstop at Bud Bales Field as the teams went through pre-game drills. “Very nerve-racking. One is going to be happy and the other one is not. My best bet is that if they can split the doubleheader and everybody’s happy.”

Still, Charlie took comfort in knowing his two sons are doing what they love, and there won’t be too many head-to-head battles like this one in the future.

“They grew up loving the game of baseball and still do,” he said. “The amount of time and effort they’ve put into it is unreal. They love every minute of it and enjoy what they’re doing for a living.”

He agreed a dad couldn’t ask for anything more than that.

“Actually, it’s more nerve-racking watching them coach than playing ball themselves,” said Charlie. “But in the end, they’re doing their best and they have good kids on their teams. It’s a lot of fun to see them develop.”

Matt and Turtle cut their teeth on baseball on the fields of Lakeshore Park, which opened in the mid-1990s and is the home of Knox Youth Sports. Their father was KYS program director for 13 years and one of his biggest duties was organizing and running youth baseball tournaments, which attracted teams from all across the country.

For 10 years, I was Charlie’s umpire supervisor and assignor and umpired in those tournaments, too. Matthew was probably around 7 years old and Jonathan 5 when I started and I saw them grow up over the summers.

Charlie often has told the story about Turtle threatening to have me fired as an umpire at Lakeshore almost 20 years ago. Apparently, I was behind the plate with Turtle, maybe 8 or 9 and at the time, up to bat. I called a strike on Turtle and he didn’t agree with it. Turtle let me know he was going to let his dad, the tournament director, know about it, too.

Not surprisingly, Turtle and Matt both said last week their dad, who is now a sales pro for BSN Sports in Knoxville, has been the most influential person in their lives when it comes to baseball.

“Absolutely,” answered Turtle. “He taught me how to throw, how to hit, how to catch. He coached us all those years and I also saw the impact he had on kids’ lives growing up. I said one day I want to be like my dad and coach and make a difference.”

Matt said he remembers learning from his dad “to respect the game and play hard.”

Like his dad, Matt also said his college coach at Hiwassee, Lance Knight, had “played a big part in my life as a coach.”

After Central pulled away for an 11-1 win in the opener, Giles County scored six runs in the top of the first inning in the second game. Central, however, came back to win 9-6 for the sweep.

“We needed it big time,” said Matt after Central won the first game to snap a four-game losing streak.

What about the opponent?

“It’s obviously good to get any win,” said Matt. “Obviously, it’s a little different playing against my brother. We’re best friends and close as can be. Like I say, a win is a win.”

And that’s the way it was on a day of mixed emotions.

Sorry Charlie, but you can still count your blessings, who are probably coaching again today and not against each other.